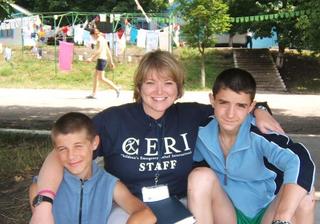 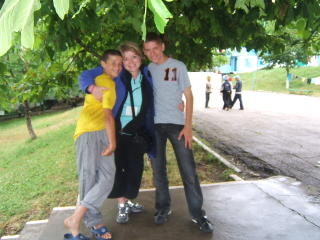 note: (top) Radu in vest with me and his friend, Sergiu today, sharing his choice with a friend (bottom) Radu in yellow, me and our translator, Eugene, yesterday after Radu prayed to accept Christ So, my boy Petru (which means The Rock) has added a new dimension to my final week here in Moldova. You might recall him as the boy I spoke about in my blog called “A Modern Day Gideon”–if you’ve not read it you really might want to scroll down a bit and come back. When I last left you, a young boy named Petru had prayed to accept Christ and asked God to acknowledge and confirm that choice as he blew on a piece of paper containing a marker. As we talked a unually rowdy boy was sitting still and listening intently. His name is Radu and as our group talked about Petru’s excellent choice I asked him if he had ever made a choice like Petru’s.
He told me he had given it a fair bit of thought and he wasn’t sure. As we continued to talk about this we agreed he would come and find me the next morning for prayer….and only God knew what else would happen. Yesterday he found me…twice. No conversation at camp is ever really private, so we had gathered a small crowd as I listened to him tell me he had observed the joy and happiness he had been observing in Petru since he heard about his prayer to ask Jesus into his life. He told me he wanted the same thing and asked to pray. Radu offered two learned prayers to God before deciding he wanted to just tell God how he was feeling and why he was making this “choice”. I cannot recall the words, but it was the most beautiful and tender prayer I’ve heard. I told Radu he could come and find me again today if he’d like to read some scripture together. This morning he brought a friend. As we began our conversation I happened to ask if he had told his friend about his exciting decision. He had not. I encouraged him to share his great decision, however he was a little shy about it. So, we talked about Petru and the joy he had and how, by Petru talking about it, Radu had been encouraged and led to make a similar decision. We read about always being willing to have a reason for the hope we have and then I challenged Radu to tell three people today about his decision. I offered to share his news with this friend and he could observe. We sat and talked and read scripture and prayed for an exciting length of time and I encouraged them to continue to find me if they wanted to talk or read or pray. This evening they were both at my heels. They brought a friend and wanted to talk with me in private. I never know what’s coming in these private conversations. As it turns out, Radu and his friend wanted to tell me how much they enjoyed the way I shared things with them and the way in which I spoke and even the tone of my voice. I thought that was very interesting—I mean they are 12, so you wouldn’t think they’d be aware of any of those things. These kids are something else…. I pressed him a little more and he told me that he had shared his decision with two people and wanted to make the third a friend he brought over, but had asked to sit a few feet away and wait on him. He wanted me to hear him talk with his friend and to use my “voice and words” if he needed me. I watched and listened as this little one shared his new faith with a friend. It was incredible. Just incredible. I feel like I’ve known these little ones for years more than they’ve even been alive and I know that is God bringing us together. It doesn’t get much greater than that. Oh, except for Radu has been challenged to share with FIVE friends tomorrow. Praise God and Stay Tuned…. Jen]]>