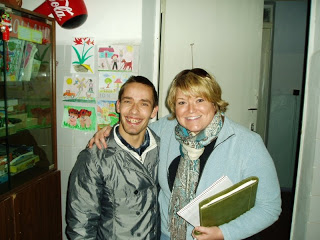 We got to visit Casa de Copii today, which was a fantastic surprise since we weren’t planning on going until tomorrow. So, being able to see the atmosphere and some of the kids before jumping head first into an entire day will hopefully help us prepare for the week.
When we arrived, it was immediately obvious that these children are starved for attention. They want to hold your hand, kiss your cheeks, and cling to you. Another one of our observations is that the children we met today are a lot older than we expected, but they were so excited to see us and talk to us. Most of the younger children were inside, including the 110 that do not get out of bed. Hopefully, we will be able to see more of the children tomorrow, who are not capable of coming to us. Our time was limited today, so be on the lookout for many amazing stories about Casa de Copii tomorrow.
But for now, let me tell you a little bit about Martin… a fantastic person who was absolutely estatic when we arrived. Jen had told me about him after her first visit to Casa de Copii months ago, (see the photo above). He is about 18 years old, and according to him, he’s famous there and everyone knows him. Needless to say, experiencing his smile and excitement in person was beyond words. He had an entire thank you speech for our team, which he presented in the middle of the playground. He told us we were bringing hope to everyone and he had been waiting for her to return with the beds. When we were leaving, Jen told him to be looking for the truck with the beds to arrive around 5:00. When we finally got there about a hour and a half late, (still no truck in sight), he was there waiting. The time we got to spend with Martin and the other boys who came out to greet us was precious. One of them would smile from ear to ear everytime we looked at him, and could barely control his excitement. Obviously, there was a reason the truck was a little later than expected.
When the truck arrived, it was really touching to see about 25 boys with various handicaps, rushed outside to help unload the truck. They moved extremely fast, and helped us complete the job in 45 minutes, which would have taken us several hours without their help.
I’m sure we’ll arrive tomorrow morning to a crowd of boys waiting for us.
Noapte Buna!!!
]]>