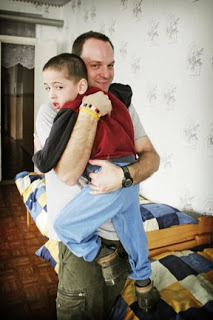 Today was a great day. We started assembling beds this morning. We had more helpers from the local church today who turned out to be Moldovan Olympic bed assembling team. In the space of about three hours the assembled all 135 of our bed frames. They worked so fast that it sort of became a problem for us to find room in our workroom to store all the frames waiting to be move the the children’s rooms. While they were assembling bed frames at the speed of light, some of the team went to have some time with some of the kids and the rest of us started carrying the bed frames down to some rooms that had been cleared out for us. Speaking of which, when we arrived in the morning some of the older boys were clearing out three rooms for us to put new beds in. All I’ll say about these boys is don’t get in their way while they’re working. They are quite enthusiastic. They cleared out three rooms totaling 42 beds. I was a little concerned because we had to replace all those beds, complete with linens by 1:00 so the children could have their naps. I wasn’t sure we could get it all done by then. Silly me. We flew through those three rooms with an hour to spare. As we were finishing a few of the kids came in to see what we had done. They were so happy about their new beds. What a great sight. What a great reminder of why we do this. We had a minor miscommunication after finishing those three rooms that caused us to waste our last hour before leaving for lunch, but we were so thrilled with the progress that had been made on assembling the bed frames that it didn’t really get us down. The kids have rest time from 1:00 to 4:00, so we went to lunch. We got back around 3:30 and started quietly carrying bed parts up to the next room we were going to work in. Our plan was to stack the frames, mattresses, linens and pillows outside the room so that we could be ready to begin when the children woke at 4:00. But, the children were already awake when we got up there and the teacher said we could go ahead and start. The beds we carried out of that room were some of the worst I have ever seen in Moldova. I worked with Irene to carry out the mattresses while some others carried out the frames. Those mattresses were completely disgusting. Really, it’s hard to even describe how bad they were. After clearing the room, we all set about filling it back up with nice, new beds. After we finished the room, they brought all the kids from that room back in to see the beds. Eighteen little boys came in the room and began squealing, laughing, and clapping with joy at the sight of the beds. They hugged us and shook our hands over and over again. I saw one boy who just kept motioning to where his old bed had been and his new bed was. I didn’t understand the words he was saying, but the look on his face told me that he just simply couldn’t believe that he would get to sleep in this new bed. The sight of it all literally brought tears to my eyes. Seeing things like that makes all the travel, bumpy roads, exhaustion, and stinkyness (ours and theirs) worth while. It reminds me what an awesome God we serve (emphasis on serve), and makes me thankful once again that He allows me to be a part of this. Stuart P.S. Thanks also to D’Ann, Cameron, and Evan for letting me do this as often as they do (and believe me, it’s often). I know it’s a sacrifice for all of you for me to be here. I love you all more than I can say.]]>