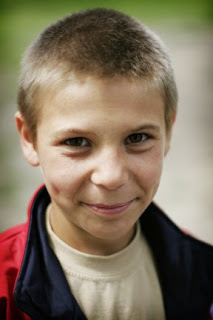 When we got to the orphanage this morning, Jen approached me and said, “How much do you love me?” “Uhhh…a lot…duh. Why?” “Because you’re coming with me and CJ. We’re going to go find a restaurant for lunch, put our order in, and then go pick up a Rurac.” It took a second for that to sink in. “What?! Are you serious?!” “I’m totally serious.” I gave her a big hug but I still wouldn’t let myself too excited. (For those of you who don’t know me, Mihai Rurac is a boy I have known, loved dearly, and sponsored for three years now) So off we went down the bumpy road to Falesti. Our first stop was the Social Assistant (aka – gatekeeper of Mihai). Luckily Emilie (don’t you love her already?) was a really nice lady and extremely helpful. After about 30 minutes, 20 phone calls, and for me a trip to the bathroom that was a very bad idea, we headed to the orphanage in Falesti to pick up a social worker who would take us to…are you ready for this? Mihai’s new house!! The 30 minute drive took us to a small village outside Falesti. The village was actually not far at all, but the roads were SSSOOOO bumpy that it took forever. We eventually reached roads impassable by car, so we got out on foot and followed a muddy path to the house. Although it wasn’t all mud, because some horses had left some welcome presents for us along the way…if you know what I mean. My heart was pounding, and I could hardly believe what was happening. Not only was I going to get to see Mihai…I was going to get to meet his new family! We walked through the gate, and I immediately recognized one of the girls (this family took in Lena and Tania – sisters – and Mihai and Vasile – brothers – from the Falesti orphanage). It didn’t take too long before a Rurac came flying around the corner screaming, “EMILY!! EMILY!!” Oh my stars…it was my boy. 🙂 That was one of the best hugs I’ve ever gotten! I met his mother, Angela, and father, George. I watched Mihai pick strawberries. I saw their garden and their chicken coop. I went in their house and saw where little Mihai lays his head down every night. I saw the table where they have meals together. I heard him call Angela “Mama.” I watched him eat a home cooked meal. I saw a happy family. And as if one Rurac isn’t enough, Vasile came home from school (he had stayed later than Mihai because of some test or something…I never quite figured that out) and that made two Ruracs! Angela and George agreed to Mihai and Vasile come back with us to Drochia. So they packed their bags, we took a family photo on the steps, and piled in the van for the bumpy ride back to Drochia. By the time we got back, most of the bed-building was finished for the day. I felt bad having missed that, but it was worth it to get to see my boy. And may I just say how beautiful the beds are?! The linens are the prettiest I’ve seen so far. I really wish you could see them for yourself. Pictures never do justice. We finally capped off the day with an impromptu worship time with the kids, complete with ra-cha-cha. We are really looking forward to the rest of the week and what joys lie ahead. Thank you for your prayers…they mean more than you know. Gratefully,
Emily
]]>