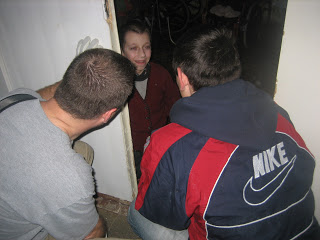 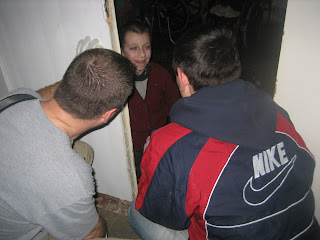 Hello friends. I thought perhaps I should say a few words about our trip to Ialoveni. This was my eighth trip to since June of 2006 and my second as a full time employee of Sweet Sleep. When I stop to think for a moment about eight trips in just a little over two years, I’m honestly a little at a loss for words. Sweet Sleep and our work in has become such a huge part of my life that it’s hard for me to even think back and remember what my life was like before all of this. I have been witness to many great things over these past couple of years, and I am grateful to God that he has brought me to this place and allowed me to be a part of this amazing ministry.

Every trip to is different. Each trip we work in a different orphanage with different directors, staff, and kids. And no matter how many times we go and how much we plan in advance, we’re always a little surprised by how things actually work out. This trip was no different in that regard. But, one thing we try to remember is that it doesn’t really matter if things don’t go exactly like we plan them. What matters is that we are there and that we are ready for God to use us that week with those kids.

Those of you who know me know that I am a planner. I like to make a plan and then stick to that plan. constantly challenges me with respect to my plans, and God is constantly reminding me that it’s not my plan for the week that is really important. On this trip, the big change of plans came when we found out that though the director of the orphanage had asked us for 170 beds, they now only needed 115. It seems that sometime shortly before we arrived another group from had come and provided some beds. Honestly, I was a little frustrated by this at first, but then I realized that this change of plans meant two things. The first thing it meant was that we would finish early, which in turn meant we had more time to spend with the kids. The first few days of the week we really hadn’t been able to spend very much quality time with the kids in Ialoveni. It was their first week of school, and I think the staff was trying to get them into their routine for the year. That meant the kids were mostly kept busy and away from us until the late afternoon. I was worrying a little about this since we aren’t just there to provide beds. We could buy beds and have them delivered to the orphanages without us being there at all. We go there so that we can share God’s love with the children. So, I was a little worried that the team wasn’t spending enough time with the kids. Finishing the beds early meant that we had a large part of Thursday to really spend time with the kids. The birthday party went great and I think the team was able to effectively communicate God’s love to the kids and staff that day.

The second thing only needing 115 beds in Ialoveni meant for us was that we suddenly had 55 extra beds. This was one of those things you might call a happy accident. I told Jen the news about the extra beds and we quickly decided that they should go to Orhei. If you’ve been keeping up with Sweet Sleep, you know that we started replacing the beds at the Casa de Copii in Orhei in March. Casa de Copii is a home for over 300 mentally and physically disabled boys. We built 135 beds there in March and were making plans for a local church to put the rest of the beds in sometime later this year. I really enjoyed the trip to Orhei in March and was really excited at the idea of going there again to put in 55 more beds. Friday morning we were able to take the team to Orhei and build those 55 beds in just over three hours! Wow! It was great to be back there and to see the friends we had made there in March. My favorite moment there involved a boy named Ion. I had met Ion on our trip in March. He is probably 14 or 15 year old and has severely deformed legs and hands. I met him on our last day in Orhei in March. We were just finishing up the beds we had and he peeked out the door of his room and asked if we were coming in there next to put new beds into the room he shared with 17 other boys. Because of his deformity, he was literally on his knees on the floor, so I bent down and told him I was sorry, but that we didn’t have any more beds for that trip. He looked me in the eyes and very calmly asked me why we had started with other rooms instead of his. There was no accusation or anger in his question, but it still broke my heart. I explained to him that we had put the beds where the director had told us to and that I was sorry he hadn’t gotten a bed this time. Then I did something I never do with kids in . I made him a promise. This one was easy to make because I knew it would come true. I promised him that we would be back and he would get a new bed. I had thought about Ion several times since that trip, and I wanted so much to be there when he got his bed. As I said, we were talking with a church in Orhei about finishing that project for us, so I didn’t think I would be there when he did get his bed. When we found out we had extra beds in Ialoveni and that we would be putting them into Orhei instead, I thought I just might get that chance. Sure enough, the first room we worked in on that Friday morning was Ion’s room! He was in there walking around on his knees and helping us put the beds in his room. I knelt down again and reminded him of our first meeting. I was so happy to be able to share that moment with him.

As I said in the beginning, every trip is different. Every trip is wonderful, and this one was no exception. God continues to reveal himself in new and wonderful ways through the children we meet in and the work that he allows us to do. God is good, and his plans are always better than my plans.

“For I know the plans I have for you ,” declares the Lord, “plans to prosper you and not to harm you, plans to give you hope and a future.” Jeremiah 29:11