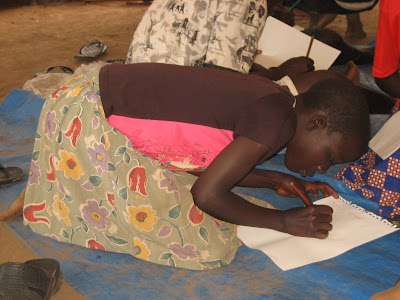 About now you’re probably returning to work or maybe you’re lucky enough to have the week off. Nonetheless, all of you are probably asking or being asked the question, “What’d you do for Christmas?” Turns out that’s somewhat of a universal question. Yesterday we went back to one of the camps we’re working with to ask how they had enjoyed sleeping in their new beds and to educate them on their new nets and malaria and, most importantly, to share with them about the meaning behind their beds. 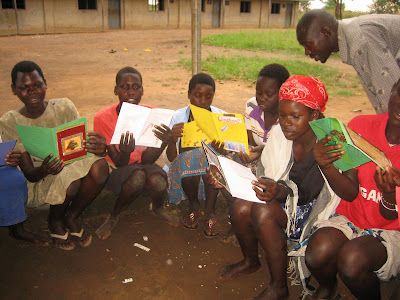 It was a rainy afternoon in Gulu, so the children had gathered inside a nearby school building rather than outside of their huts, like usual. As we all crammed into a school room April and I listened as VOH’s director went from child to child to child asking each, “What did you do for Christmas?” The answers came like this: “On Christmas I woke up and went and got water and washed my clothes and cleaned my hut.” “When I woke up I cleaned the hut, went for water, made some tea and washed the utensils.” “My friends and I found some meat and we went for water and when we came back we found a dog had eaten our meat, so we had millet and did some dance.” Millet is a grain, by the way. “On Christmas, when I woke up, we went to get water to make some tea and to wash the clothes and clean the utensils. I made a fire and said some prayers and for dinner we had some goat.” “On Christmas we woke up and got some water and ate some millet and then went to find some things to sell in the Centre to make some money.” “We went to the Centre to make some money on Christmas too, but there wasn’t much money to be made so we came home and washed our clothes.” “Christmas we didn’t do anything much different than the other days. We cleaned and got water and ate millet.” And so it went. All of the 40 or so children who were there yesterday had the same kind of things to say. Some talked about how their peers had tried to influence them to do bad things. As I listened to each of them share their Christmas Day stories, several things struck me. One was that they were all so happy to share what they had done and each did so with some amount of laughter. They found great joy in their sharing. Maybe it was that somebody was listening to them. Maybe it was nervous laughter because they were speaking in a group. Maybe it was just laughter that comes from being a child and being with other children. Maybe it’s because there was joy in doing all those things —because they were able to HAVE those experiences without being forced to hunt, hurt or harm others (in the LRA) and found delight in enjoying life’s simple things. I imagine it’s all of these together. 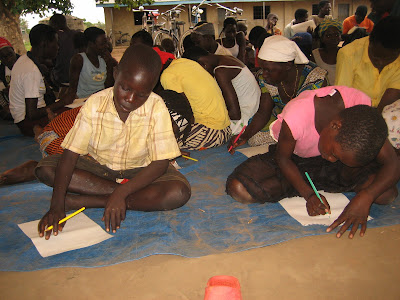 It made me think about this own question in my life. Not so much this year. This year, as you read earlier, I went to a loud church with lots of jumping and dancing and spent Christmas for 13 or so orphans; playing with them, holding them, loving them, talking with them, feeding them, talking about baby Jesus and how much God loves them. Santa didn’t come here. Not to me, not to April or Beth and not to these children. The day was about happiness, about putting on your best clothes as a way to honor God as they jumped up and down and swayed in celebration or honor or glory of Him. It was about being alive and being thankful for the life that God gave them and thankful to the One who gave them life. 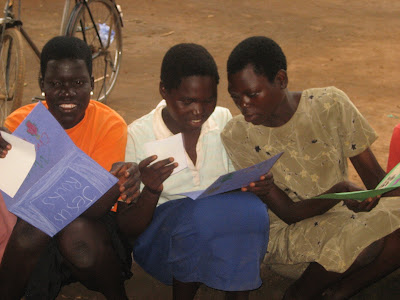 I thought of nearly every single other year of my life over the Christmas holidays. Busyness. Stuff. Stress. Food. More stress. Presents. Worry over what presents to buy for who. Worrying about not having enough presents and then worrying because you’d spent so much money on all those presents. All that stuff I know all of us can easily relate to. Over the last few years there seems to have been a trend….an awareness…among people to examine their holiday ways and make changes. Changes to trim off the excess; to spend their time and resources more wisely; to care for those who don’t have the blessings they do. I’ve listened to this talked about in church. I’ve seen it in your own lives. I’ve seen it at Sweet Sleep as the number of people who choose to “Give the Gift” to those they love or those they’ve lost has increased. This is why we’re here, in Gulu, this Christmas. We’re here because of the choice that you made in giving a bed to an orphan here. When you gave in honor of someone or in memory of someone or just because you wanted to, you have helped bring health, hope, happiness, joy, excitement and love to these children’s lives. That’s a gift they can’t even begin to understand yet. But you can. The pictures you’re seeing are actually from today’s camp while the stories above were from yesterday’s. Apparently I didn’t have my camera with me. Regardless, their hearts were the same. These are photos of the children writing thank you notes to you all. And, then of them receiving cards from school children in the States. 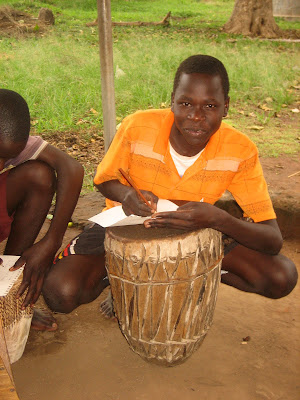 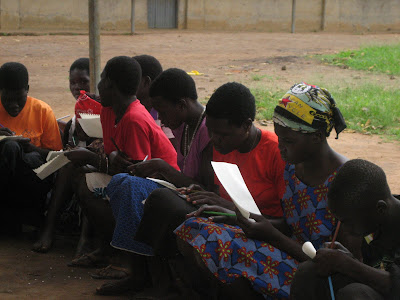 Finally, here’s something super fun to share. Today when I asked the children how they felt when they first slept on their new bed instead of on the ground or their mats, one little boy raised his had right away. He answered in Acholi (the language in the north) and all the children absolutely burst into laughter. We turned for translation….this little boy said when he laid down in his bed he felt like he was sinking and sinking down and down. Love it. See you in the next blog,
Jen]]>