<![CDATA[This afternoon I'd like to share something with you from our partners we're here serving right now, The Global Orphan Project. Alan Dietrich, live from Haiti: <span>Two precious lives forever changed by the earthquake in Haiti. The first is Jean Marc Vaval, the son of our dear Pastor Moise Vaval, GO Haiti Field Director. You’ve read that he had not been found since the quake. The excavation of his school where he had last been seen has been occurring, and we visited there yesterday. The massive structure was completely leveled, and the grounds covered in school papers. Jean Marc’s body was found (earlier this weeek) and eventually taken to University Hospital. Though his body is there, we know that he is in heaven with our Lord and Savior. His parents are true faith heroes – serving orphans and their community tirelessly each and every day and night, including during this time of uncertainty, with grace and determination. Please lift up a prayer for their family. 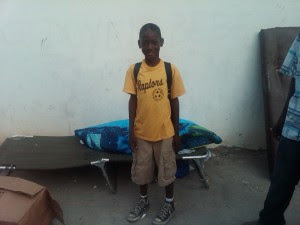 And, from the same University Hospital, a new life begins. A ten year old boy, the only child in his family, named Jovani Michel, was returning home from the store with groceries for his mom when the earthquake struck. By the time he reached home, he found that his mother and father did not survive. He wandered to the grounds outside the Palace, which now lay in ruins as well, and slept outside the gates for several nights. Someone brought him to the University Hospital, where the clinicians and US Army soldiers serving there fed him and gave him a cot and sleeping bag, and called us. We are blessed to have a new, very energetic member of our family here at the OTV. And, the rest of his life on earth begins tonight in our care.
Our team is being blessed by the children God has called us here to love. I’ve never worked with children who are so in need of love and attention and to feel you close to them. One of our team members is a child trauma counselor who continues to help us understand the actions of the children that stem from what they’ve experienced over the last 6 weeks. So often I see what happens to a child when they lose their parents. This week I’ve seen what happens to parents when they lose their child. As I type this, Pastor Moise and his family are in a time of great sadness. Pastor is leading the funeral of his precious son, Jean Marc, who was days shy of turning 9 on the day of the earthquake. Since the earthquake, Jean Marc’s parents have continued to search the rubble of their son’s school. After a week or so he was listed as “missing” however, Mrs. Vaval felt God had given her word that her son was okay. She began to get word that he had been sighted in the Dominican Republic and so last week she was going from field hospital to field hospital showing his picture and getting reports he had been sighted. When his body was uncovered a few days ago, Pastor had to make the difficult call to his wife, still searching in the DR. Pray for pastor, his wife, two daughters and son as they take time as a family to heal. Pray especially for Mrs. Vaval whose mother’s heart is deeply broken and is still struggling to understand the word she believed came from God, while she wipes her tears away at Jean Marc’s burial site. Blessings to you, sweet friends. See you in the next blog,
Jen]]>