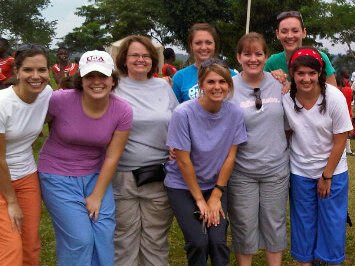 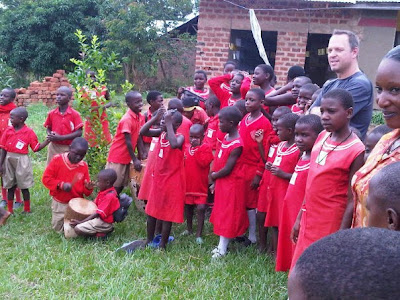 Kids cheering on the teams. 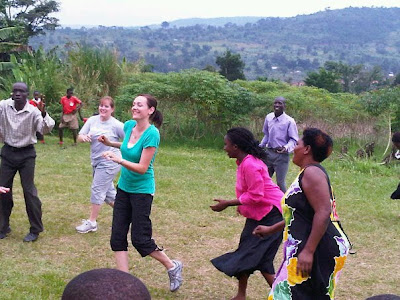 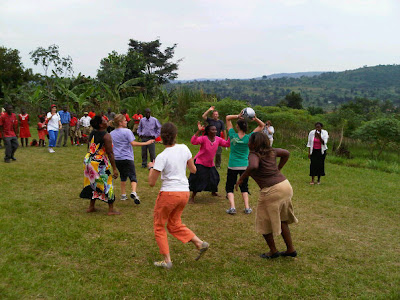 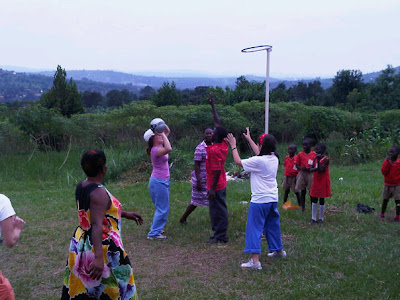 Abigail our super shot!
Tuesday June 15th:
Today was a great day at Blessed Hope. We started our day with recreation games with the kids. First was a game called “Netball.” Netball is very similar to basketball only we played on grass and did not dribble the ball. Netball is also only a game for the girls. There were four “houses” of girls and the winner of the first two games both played each other for the championship. Next came a surprise when all of us girls from Sweet Sleep were asked to play the teachers! We put up a good fight but needless to say we got our tails beat. The kids had drums and were chanting “U.S.A…U.S.A…” to cheer for us. The boys then began games of football (soccer in America). During that time I had a chance to speak with one of the girls who speaks English rather well and is incredibly smart. Her English name is Babra, spoken as Barbara. Babra shared with me that she was a twin before her twin brother died of Malaria and next her father was also taken by Malaria. Her mother is unable to support her and now lives quite a distance away from the orphanage. She is fourteen years old and is amazingly intelligent. She says she wants to be a doctor for babies. I told her that it is called a pediatrician and we had a good laugh as she tried to pronounce it. Later, she asked me to come with her to her classroom. She showed me her books, how to spell her African name on the chalkboard and also gave me a letter she had previously wrote. The letter warmed my heart and went like this: “Dear Aunt Alexersis, I greet you in Jesus name. Yesterday I was so happy. It was a blessing day. Thank you for the love you showed me. Thank you for the beds you and your group provided. I are so happy.
God bless you, from Babra.” This was definitely the highlight of my day. I think it is safe to say I will never forget Babra. Worship was also awesome today. After singing a few songs the children were given their Bibles. It nearly brought me to tears to see how happy the children were to get a Bible. In America, most children do not think twice about new Bibles. I sat with a group of children and taught them how to read their Bibles and helped them find specific verses. One little girl wanted me to read her Bible with her and we sat as she read and asked for assistance on the difficult words. Overall today was amazing.
]]>