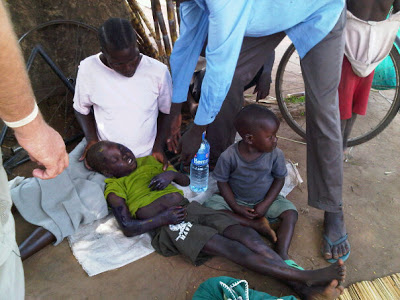 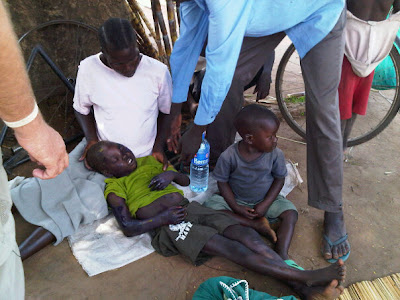 Ivan is a six year old boy I met today under a tree in Amuru, an area about an hour and a half into the bush outside of Gulu. I met him because a man came up to Gary right after we arrived with an urgent message, but he had no idea what he was saying.

After our ARC field director, Jennifer, translated we learned he was telling us there was a boy who was burnt and needed help. He took us to Ivan.

As I was walking up to the scene I noticed there was a crowd of 25 or so men, woman and children all standing around with worried expressions and their gazes upon a lifeless looking little boy laying across a woman’s lap who was fanning a piece of fabric over him to keep the flies off.

Our Board member Gary, who is the director of emergency services at Vanderbilt, took a quick assessment of him and began asking questions:
-“When did this happen?”: “yesterday”
-“How did this happen?”: “His mother was not around and he was playing near a pot of water over a fire and it came down on him.”
-“How old is he?”: “Six”
-“How long has he been asleep?”: nobody really knew

We knew he needed to be taken to a hospital right away. They said “clinic” and Gary said, “No, clinic, it has to be a hospital.”

We determined the woman fanning him was his mother and that the reason he wasn’t being treated, or at least one of many, was that transportation wasn’t available. I asked the mother, Frances, if she would agree to take him to the hospital if we were to provide transportation. I explained that he needed to have some surgery to help him and the doctors would know what to do. She didn’t really answer, so I added that we would pay for his expenses and she nodded her head. I went to work on logistics for transportation and determined that our first mattress truck was almost on site. As soon as it arrived and was unloaded a man near the tree scooped up little unconscious Ivan and he, his mother and little brother got into the truck for the long arduous journey to the hospital. 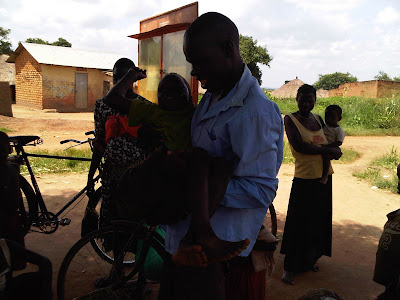 Under another tree, not very far away, sat 60 children and their caregivers waiting for their Sweet Sleep beds. We had learned they had arrived at 7 am to anxiously wait for their new beds. It was 12:45.

As I walked across the field I asked God for something that seemed kind of silly at the time, a signal so I could update the prayer need to Facebook and Twitter. Suddenly, I had a signal in the bush.

As I typed and walked and prayed I was also trying to make the mental transition from sweet lil Ivan to the excited children a few yards from me who needed to hear the story of hope and love our beds bring. Ivan was never far from my thought and I prayed for him all day.

On the way home tonight we stopped at the hospital to check on him. Gary told me just before I prayed for God to give me a cell signal, that he was probably going to die…and that made me angry. Not at Gary, just at the idea of a child dying. When we arrived I asked Gary and Jennifer to go in and check which building he was in. Honestly, I was afraid to get out and to go inside and be faced with something I didn’t want to hear. I decided I just wanted to sit where I was and pray.

They were gone a long time and when I finally saw them coming toward us I was trying to read Gary’s body language. His hat was off and he was rubbing his head. I tried to find a way to prepare myself, but I wasn’t working. I just sat and watched Gary as he walked up to our open van door, “He’s in the OR right now. He has 2nd and 3rd degree burns. There’s a lot of work to do.” The first 48 hours after a burn are the most critical. A burn victim has to have large volumes of IV fluid and all of the burn tissue has to be removed. The most serious complication is infection.

Just a little while ago Jennifer called. Lil Ivan made it out of the OR. Clearly he still needs all of our prayers. Will you please pray with me?

There are other aspects of this story. His mother is pregnant. His little brother is about 2 and was admitted while they were there tonight. He tested positive for malaria. The hospitals don’t provide food to anyone. Jennifer gave his mother a little money tonight for a meal. The hospital will only keep him for 5 days. The burns were very bad to his left hand. Gary had been concerned he would lose his hand. As of yet he has not. His left eye and face is very badly burnt. Today I learned a lot. About burns. About how God uses people who are obedient. About faith. About hope. About the power of social networking for prayers.

Please do pray for Ivan, his brother, mother and doctors. Feel free to send this post around to anyone who can pray with us.