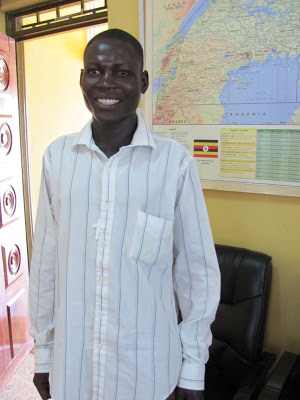 <![CDATA[Scott Harris, the missions pastor at my home church, Brentwood Baptist, has been a part of our work in Gulu this week. This morning I took Scott to meet with one of our ministry partners in Gulu, World Vision's "Uganda Children of War Rehabilitative Program". The work they do is beyond description (but I'll give it my best in a future post). While we met with them they shared an immediate need for 300 beds (I can hear a Christmas campaign in my head....). On a tour of their facility we met Jon, Moses and Patrick, a few young men in the program. This is only the second time I&#8217;ve ever had the privilege of meeting some of the recipients in their care. As we walked away the name &#8220;Patrick&#8221; hit me and I wondered if it was the Patrick our World Vision partners talked about <a href="http://vimeo.com/channels/sweetsleep#14033722">here. I chatted with Christine and learned it was not. However, she asked if we’d like to talk with one of the boys. My heart nearly stopped beating; I couldn’t even imagine getting to have the opportunity to sit with one of these tender young men and talk with them. We said we would be honored and went to wait in an office. When Christine returned she was with Moses, a young man we’d just met. Ironically, while we had been sitting and waiting, Scott asked me if I had noticed that one of the young men was missing a finger. I had…and now I was face to face with a nervous looking man in a crisp white striped shirt, clean khakis and new shoes… Moses. 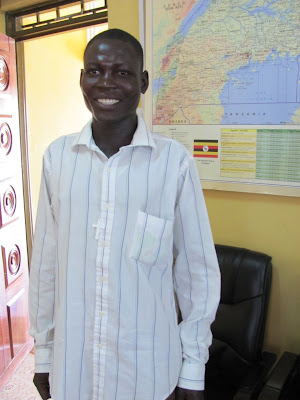 I was so glad Scott was with me because he is a master of asking questions but more because after about 3 minutes I was working hard to not turn into a teary puddle. I promised Moses I would tell his story…and here it is: When Moses was just 10 years old he was abducted from his home by the LRA (Lord’s Resistance Army). He was in captivity for 14 years. FOURTEEN YEARS. I cannot imagine. Nobody can. Moses said he tried to escape several times and each time was badly beaten. Christine shared that he was lucky—most who try to escape from the LRA are killed. Over all of those years Moses traveled with the LRA throughout northern Uganda and Southern Sudan. He says his body still feels week from carrying “luggage” (large trunks filled with food for the adult members of the army, weapons and other various machines and goods that the commanders wanted to take with them from place to place. His developing body was deprived from the food and proper sleep he needed to grow strong. He undoubtedly battled countless cases of malaria and other various illnesses. One night, just a little over a year ago, Moses and another friend in the LRA decided to risk it all and escape again. This time they were successful. They walked until they found Ugandan soldiers to turn themselves into. From there the soldiers knew to take the young men to the WV Children of War Rehabilitation Program in Gulu. Christine had shared with us that most times males live in their center for 1-3 months, depending on the length of time they were in captivity and their experiences in the bush. November marks 1-year for Moses. My heart simultaneously breaks for him and leaps for joy that he has been so brave as to risk his life and to now fight for his future. We learned from Moses that in his year at WV he has been able to visit his family once–for several weeks–as part of the reintegration process. They were no longer living in the same place they were when he was abducted. His father has since passed away, his mother is now very weak. He has a younger brother who is 20 and new siblings who are 8 and 5…whom he’d never met until recently. The reason he was so dressed up is that he was returning to his family today….permanently. Moses will live with his paternal uncle and sleep in his Sweet Sleep bed. Just typing that brings tears to my eyes. I explained to Moses that part of my job was to go home and tell his story to others so that people could know about the situation in northern Uganda and be able to respond. I told him I would go home and share with everyone whatever he’d like and asked what that might be. Moses replied, “We (many of us) have retained bullets in our body and need to pray for that. I’m also saying that we have nothing yet to support us and because of you, we have hope and something to sleep on and I am asking you continue to support others like us. I want to give thanks and pray for thanksgiving because you add on to support with World Vision and we get the opportunity for a future where we will find life.” His journey will continue to be difficult. He has a bullet in his temple close to his right eye which effects his vision. The doctors say it is too dangerous to remove it. He has another bullet in one of his right fingers and is missing his right pointer finger. His right forearm has a rod in it the doctors put there to “make it stronger”. There’s unimaginable horror that goes along with his physical reminders of his childhood and adolescence in captivity. I asked Moses if he prayed a lot. He flashed a big, beautiful smile and said he did. I asked what he prayed for and he said he prayed very often for God to forgive him of what he had done and to help him in the future. I told Moses I was certain God had forgiven him and asked if he knew that and believed that. He said he did. I will continue to pray that he does, indeed, know and believe that. I promised Moses I and my friends would pray for him in the days and months ahead. He asked us to pray for his next medical treatment in January when doctors will remove the rod in his right arm and re-examine the bullets in his body. He asked us to pray for reintegration with his family. He is nervous of what they will all think of him, if they will really accept him, what the community will hear and talk about. He’s worried they will feel like he is a danger to them. Moses just wants to be accepted. He just wants to be loved. He just wants to have his life back. We prayed for Moses to choose joy. To chose to live with God each day. We prayed for his life and that his bed would serve as a reminder to him that God was all around him and was always with him. We prayed that his Bible would be a guide for his life. We thanked God for saving his life and prayed it would be used to help others, giving God the glory. We prayed many things. Now we need many people to pray. Will you commit to pray for Moses? His new life will take much prayer and I will keep up with him…and share with you. We are here because of you. Moses has a bed, mosquito net and a Bible..because of you. I’m so appreciative. Thank you, my friends. Sweetly,
Jen]]>