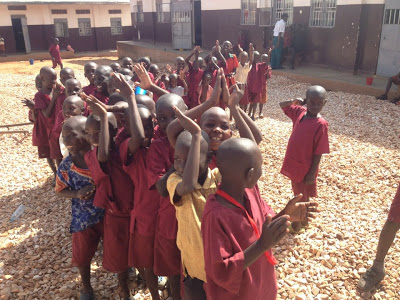 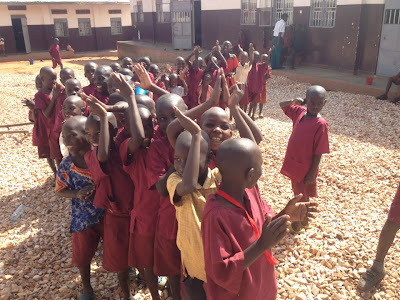 Bed Day finally arrived! After a several months of prepping, fundraising, writing letters, giving presentations, going to meetings, and traveling thousands of miles across the world we were able to fulfill part of God’s plan of showing love to His children by providing 120 beds to Good Samaritan Home.  We began the day by traveling the long, bumpy road to the home, the highlight (for me, anyway) of which is hearing shouts of “Bye Mzungu!” (no matter if we’re coming or going) from the community children and replying with smiles and waves. Picking up where we left off on the tour yesterday, we were quickly accosted by a group of the younger children who were eager to grab our hands and hold on for dear life as we ran around the campus and met some of the staff and administrators. They followed us up to the dormitory where the girls sleep, which is about five or six stories tall; three of which are used and three which are not. We climbed up to one of the top floors and took in an amazing view of the city. Eventually we made our way back down to the boys’ area where we began the bed set up. After the old mattresses were cleared out, the children began carrying down the bed frames, which are bunks, and we assembled them. Then they packed down the mattresses. It should be said that the children carrying the beds and mattresses were not necessarily the ones receiving beds. This continues to be a theme I love about the Ugandan people: community. They were genuinely happy that their brothers and sisters were getting new beds; no one was upset or jealous. I am continuously reminded that we have a lot to learn from these precious people.   When it was finally time for the children who were receiving beds to get them, they lined up and calmly walked into the dorm, at first. Once they realized what was going on they began running, shouting, and smiling. You must know that I’m not usually an emotional person, but I looked at Josephine (Sweet Sleep’s director in Uganda) and she had her face in her hand and I began to tear up. I had to quickly look away at the wall so I wouldn’t break down right there. It’s very rare to witness genuine excitement, so it’s very overwhelming when it happens. One of the little boys asked me if I could help him make his bed, so I busied myself with that task as best as I could. We then moved up to the girls’ dorm and did the same.  One thing different about Good Samaritan compared with New Kabaale (where we went last year) is that it is large enough to have social workers among the staff. I had the great opportunity to speak with Lawrence, one of my global colleagues.  He is 30, and even though he does not have children of his own, he is so purposeful in taking care of these who in some cases have no one to look after them. After general exchange of  information about which classes we took in school (research, human behavior, psychology, counseling), we began to talk of what we as social workers feel our role is. Lawrence is mainly concerned with making sure the kids are cared for. Sometimes the kids come from families where they are hit, yelled at, and belittled; Lawrence feels his job is to make them feel loved. He understands the importance of empowerment (one of the key social work concepts) and instilling hope in these young lives so they may grow up and be caring, loving adults to their children. One of his projects is writing a book about how to take care of children properly, especially for young mothers. We were both interested to learn that we face some of the same problems as social workers, even though we live worlds apart. was very inspiring to be able to talk with Lawrence, who is so passionate about his work and has such a heart for these kids. I hope to bring some of that passion back home with me and continue my journey in finding purpose in my life. Thank you all for reading and a special thank you to all who contributed toward this trip. Just know that you have impacted literally hundreds of lives this week. You may not know names or faces, but rest assured that your financial sacrifice is coming back tenfold. Rebecca]]>