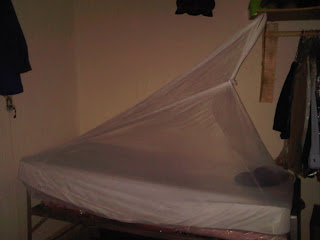 I’m from Illinois. I do tornadoes. Tornadoes let you know ahead of time they’ll be in your area and you local friendly TV weather man will tell you exactly what time they’ll be arriving at your doorstep so you’ll already be waiting for them in your bathtub with a mattress over your head.

Earthquakes, it seems, don’t lend the same kind of thoughtfulness. If they did then our 230,000 brothers and sisters estimated deceased would have been waiting for the quakes arrival with their loved ones in soccer fields and open public areas.

The devastation here, as you’ve seen over my pictures this week, is shocking. It’s maybe like being on a movie set—except these people aren’t actors–they’re victims and because of 38 seconds they’ve lost everything, including their dignity and their innocence.

As compassionately as I’ve been able to, I’ve listened to countless stories from pastors, children, mothers, aunties, translators and any other national about the afternoon of January 12th and their hurt and struggles since. Sometimes you don’t even have to hear their stories. It’s written across their faces. Tens of thousands if not hundreds of thousands are sleeping in tents. Some because their homes have “cracked” or “crushed” and some because they are so fearful of what might happen as the land below their feet still shakes without warning.

This morning God changed my capacity to understand their fears.
I couldn’t fall asleep until just after 2:00 am. My last thoughts as I drifted asleep were about the ceiling above me and how heavy it would be if we were to have an earthquake and it landed on my head. A little over two hours later I was instantly awakened by a strong shaking and a deep rumbling sound.

I knew instantly it was a quake, maybe the better term is aftershock. I got out of my bed in warp speed, however my foot was tangled in my carefully tucked in mosquito net.

My roomie, Jodi, says the scene of me getting out of my bed is one she’ll never forget. She thought a rat or giant vermin had landed on her bed and was trying to figure out what to do. Jodi says she doesn’t think either of my feet touched the ground in my bedroom, but rather one touched down in the hall. I would say there’s strong truth to that possibility. 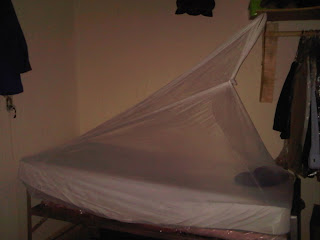 This is my bed after a normal exit. 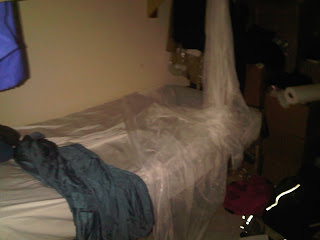 This is my bed after this morning’s evacuation.

In the hallway I hit the ground hard. I think one of my feet got tangled in my mosquito net and pulled me down. I screamed…really loud either as I was going down or while I was down. I couldn’t get my bearings or wriggle free instantly and I remember looking up..like up–up, to see if the concrete was falling out of the sky yet.

I scrambled up and ran toward the stairs where another team member was already at the top. There was a lot of commotion and I don’t remember what was happening around me because I was expecting walls to start caving in any second. If it sounds dramatic, well good. It was. Still is.

I sped down the stairs and jumped off the last 2 to get to the gate. I really expected to start feeling concrete hit me. At the gate we had a harsh reality; we weren’t able to open the gate out of the house. I stood there, in the dark, looking at the gate and to the courtyard thinking, “We’re going to die right here at the gate.”

Somebody on the team asked where Michlet (the young man helping us out at our house) was. As logistics chief, I felt it was my responsibility to instantly start yelling his name so he’d come let the gate open and free us. That didn’t really work so much.

Suddenly…or as it seemed at the time, finally, Alan–another team member came up and leaned down to move the metal latch which opened the gate, freeing us into the courtyard.

As we collected our wits in the courtyard some of the team hadn’t been sure of what was happening until I screamed, bringing “a moment of clarity” as Paul said, about what he wondered was really happening. Others hadn’t felt it, but were awakened by my scream. I won’t charge them for that, but I do expect Christmas cards from now on.

As team members started going back inside I couldn’t make myself. I actually ended up crying…full of thoughts of the week that had finally caught up with me.

As long as this blog is, the whole thing lasted 5-10 seconds. 38 seconds must have seemed like an eternity. Our aftershock registered as a 4.7. Today we were 2 hours from Port Au Prince and a pastor told us they’d felt the shake as well. Incredible.

Friends, I cannot urge you enough to continue to pray for these people. Be intentional in remembering the hurting, praying for the hope Haitians are seeking as well as the wisdom needed as Haitians rebuild a country.

And, pray for the American church as HORT looks to find churches to help walk with Haitian churches in caring for orphans and families in their community. And for your own involvement as you journey with us to give comforting beds to children who are emotionally traumatized and need a loving place to lay their sweet heads.

Oh, and Jodi is now calling me Elasta-girl.