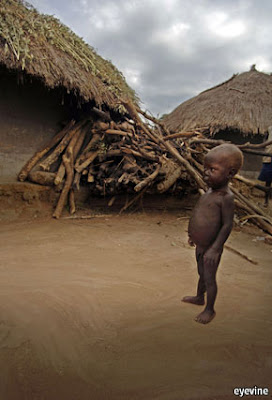 Uganda’s dangerous rebels
Lords of woe
America wants to end the reign of a brutal rebel group. But can it?

FOR a man whose job consists largely of counting the massacred, raped and abducted among his flock, Father Benoît Kinalegu is surprisingly sunny. He firmly expects Barack Obama to send American forces to intervene soon in the nasty guerrilla conflict on his doorstep. “It’s not enough just to send money,” he says, sitting in his office in Dungu, in the remote north-eastern part of Congo.

Two years ago the Lord’s Resistance Army (LRA), a Ugandan rebel group, unleashed a brutal campaign, perhaps its bloodiest in more than two decades of its existence, against isolated villages in the ungoverned borderlands straddling north-eastern Congo, southern Sudan and the eastern bit of the Central African Republic (CAR). The UN has documented more than 2,000 civilian killings and 2,600 kidnappings by the LRA in the past two years; other human-rights people say a lot more. At least 440,000 people have fled their homes. Until a few months ago, Father Kinalegu had little reason to hope that the rebels and their bloodthirsty leader, Joseph Kony, would ever be stopped.

But in May Mr Obama signed into law the Lord’s Resistance Army Disarmament and Northern Uganda Recovery Act, making it American policy to kill or capture Mr Kony and to crush his rebellion once and for all. America has repeatedly said that peace in the region is in its own interest. It would free up thousands of Ugandan troops to redeploy them under the African Union’s aegis in Somalia, where the rise of the jihadist Shabab militia has rattled the Americans.

The new law was also born of a moral obligation to make up for past mistakes. On December 14th 2008, less than three weeks before George Bush left office, the Americans provided advisers, intelligence and logistical support for a Ugandan army operation to hit LRA bases in Congo. But the air raids failed to defeat the rebels, Ugandan ground troops never arrived, and Mr Kony and his closest LRA friends escaped. Since the Ugandans and their American backers had no plan to protect civilians, the LRA began a new killing spree that continues to this day.

Getting Mr Kony and his henchmen was never going to be easy. With forces already operating in two big combat theatres, Iraq and Afghanistan, and painful memories of its intervention in Somalia nearly two decades ago lingering, it was unlikely that America would send troops to fight an African bush war. Among its potential partners in the region, Kenya is loth to get involved. The Ugandan army is better placed to serve as America’s proxy. But its record, after failing for 20 years to clobber the LRA, is hardly glorious.

This time the elasticity of the new American law may help. It allows for American financial and logistical backing for a small coalition of the willing. The French already have a permanent base in the CAR and a long history of intervening in African trouble-spots. Some senior Ugandan soldiers have called for drone attacks against the rebels. “It’s not just a choice between minor logistical support or putting hundreds of American troops on the ground,” says Paul Ronan, a founder of Resolve, a Washington-based lobby that pushed for the law. “There’s a wide range of options in between. There’s a lot the Obama administration can do if they’re serious about this.”

The Americans are due to announce a plan of action later this month. Doing nothing could be costly. In August Mr Kony is believed to have slipped beyond the reach of Uganda’s army into the southern part of the embattled Sudanese region of Darfur, perhaps to renew ties with his former benefactors in the government in Khartoum, Sudan’s capital. As ethnic tensions in Darfur still simmer and southern Sudan is on edge ahead of an independence referendum due in January, Mr Kony and his men can still sow strife across a wide area. Hence America’s renewed eagerness to stop him.

Now that you’ve read this, take advantage of the opportunity you have to help. Go to this page and sign the petition: http://salsa.democracyinaction.org/o/2241/action/pledge . This is really happening, but only if we keep it moving. I’ve signed. Will you?