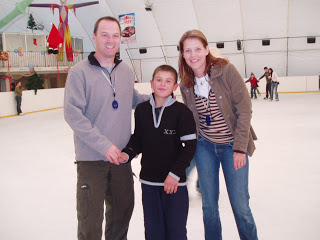 Well, it’s here. It’s our last day. Really, it’s only half a day. I’m trying very hard not to let the sadness start before I even see Petrica today.

Yesterday we had a great day. We took the children ice skating in the morning. Petrica had so much fun. He was really good, and just had a huge smile on his face the whole time. He had told us before that he had only been ice skating once before, so we asked him how he could be so good. He told us that he used to slide around in his shoes on a frozen pond in his village before he came to the orphanage. D’Ann and I talked about how based on a few little things like this he has said both on this trip and on my trip in June, that it seems that he had a whole other life before he was abandoned at the age of about six.

After skating, we had lunch and then went back to the orphanage where D’Ann and I got to have a meeting with Ms. Galina to talk about Petrica. She told us a lot of good things about him, but mostly we talked about the fact that as far as the government is concerned, he doesn’t exist. Petrica was brought to the orphanage about five years ago by some people in a village outside of Chisinau who had found him abandoned and living alone in the woods. The kept him in their home for a winter, and then took him to Internat II. He has no birth certificate, and they don’t really know for sure when his birthday is, or how old he is. I knew that we needed to somehow get papers for Petrica so that he could get a job and an apartment in a few years when he graduates from school, but Ms. Galina told us something yesterday that made it much more urgent. She told us that in about two weeks, the government will begin checking the papers of all the children in the orphanages, and that without papers to say that Petrica belongs at Internat II, he could be taken away and sent to a school in the county he came from. It is truly frightening to think that in a few weeks he could be taken from here and we might never see him again. But, Ms. Galina seemed confident that she could get papers for him in the next couple of weeks if she could take Petrica to the village and start asking around about him. They have an idea of who his mother might be, and it’s likely that if she is even still alive, that she wouldn’t want anything to do with him. If they can establish with certainty who his mother is or was, then she can probably find a birth certificate in that town. If not, then she can finally have him declared a true orphan and get his papers for that. I could tell at the end of the meeting that D’Ann was upset by what she had heard, and by the thought of Petrica leaving Chisinau. I told her not to worry because if Ms. Galina wants get Petrica papers, she will do it. Generally speaking, what Ms. Galina wants, Ms. Galina gets, and it was obvious to us that she really doesn’t want Petrica to be taken from her school.

After our meeting, we took the kids to a place near the orphanage that cares for children with disabilities. It was the most un-Moldovan place I have seen in this country. The building was very nice and very colorful. We gave the kids there bananas, cookies, and chocolates. After that, we went outside and raked the leaves from around their building. The kids jumped right in and worked hard to pick up the leaves and bag them. When given the opportunity, they are so giving. It’s really wonderful to watch.

This morning we will be taking the kids to a home for elderly people to pass out some bananas and cookies. I think it will be another great experience like we had at the deaf community and the school for disabled children. After that, we’ll have lunch at the Irish Pub and then take the kids back to school to say goodbye. I know it will be very difficult to say goodbye because I know that I won’t be seeing Petrica again until next summer, and that just seems so far away. But, I leave with the happiness of having spent a few more days with this wonderful boy that God has brought into our lives, and that is truly a blessing beyond measure.