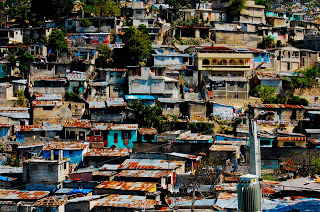 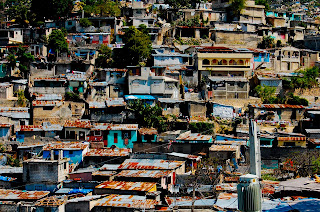 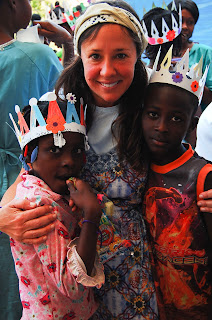 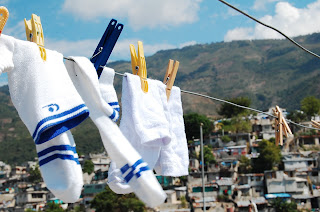 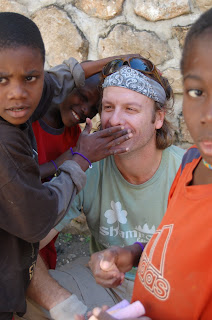 It is a joy to share that today is the day our group leaders, Todd and Laura Ramey became a family. Before we give the highlights of this precious adoption of 3 Haitian boys (Wilnes, Woody, and Wendy with y pronounced z in Creole) we want to take you on our Palm Sunday journey…

At 8:30a.m. we were all dressed up and ready for a quick ride in the “tap tap” truck to Dr. Bernard’s church where he preaches just down the road outside Petionville. Dr. Bernard is a man of many hats in Haiti. Not only is he a preacher but he is also the owner of our guest house, attorney to the Ramey’s and director of several orphanages. (not the one that we are serving) As we pulled up there were precious children with their Sunday best on holding hands and walking into a beautiful white church. The architecture was amazing as they had iron symbols beginning with Noah’s ark, the ten commandments and the cross. Katie commented that this was exactly the kind of church that she would want to be married in. After joyful singing Dr. B asked Laura and Todd to come and share. This was unexpected but they did a beautiful job thanking the people of Haiti for welcoming us. Dr. B translated in Creole to the congregation. We were then surprised that as a group we were asked to come forward and sing a song to the church. Thankfully God blessed all of us with the gift of Heather’s voice. Her angelic voice filled the beautiful church with “Lord I lift your Name on High” and the rest of us were her backup singers swaying and sometimes raising our hands in Praise to Jesus (Chet just swayed…). Unlike typical Haitian churches, Dr. B’s service was only an hour and a half. We considered it a blessing to have a relatively short service along with the cool breeze that flowed through the church. I’m not sure if others have mentioned it, but contrary to typical Haitian weather, we have experienced pleasantly warm and breezy days. In fact, hardly anyone has seen a mosquito. We are OBVIOUSLY feeling your prayers with these simple blessings of comfort.

Following church we returned for a wonderful lunch and then gathered our cameras and water bottles for a sightseeing excursion to Port Au Prince. Our precious interpreters (Stephanie and Argentine) took us through the heart of the city where destruction and the reminder of the earthquake surround you. I (Mary Virginia) had the opportunity to sit with Heather in the front of the truck and snap pictures through the city. (In the back of the tap tap truck you are literally in a cage and therefore pictures are not good) We felt as though we were part of a movie, that what we were seeing couldn’t be real. The poverty was overwhelming to me. Tents, shanties, tarps, as far as the eye could see. The smells, the dirty polluted air and the crowds of Haitians were intimidating but we felt a peace that only the Lord could provide us as we slowly moved through the city.

We were taken to the orphanage were Stephanie and Argentine had lived and actually experienced the earthquake in. This was one of Dr. B’s orphanages and it was an excellent facility which included a library, computers and a separate building separating the boys and the girls sleeping quarters. As a group, we were all hit with the sheer contrast of the desperate situation at the orphanage we are serving in Petionville. While touring the facility, Todd received a call that their boys were at Dr. B ‘s office near the palace. It was the first time to meet up with them since we had arrived in Haiti. This day had been prayed for by so many of you reading the blog and by our group.

It was a short but emotional ride to the location where the boys, their orphanage director and caregiver were awaiting. In addition to the boys, their mothers had travelled a great distance to meet and give blessings to Todd and Laura. Its hard to put in words the emotions that we all experienced as this “new life” was being exchanged on the side of a bustling Haiti street. It was not private, it was not quiet and it definitely was not without tears…just as a family should be. Watching Laura and Todd run to their children and hug them and then the exchange of words of encouragement and love to the mothers was unforgettable. We will forever hold those moments in our hearts. Again, another blessing that the Lord has given our group, to be a part of this reunion up close and intimate was not only a blessing, but a gift to each of us. We saw Jesus through Todd and Laura today, and will forever feel a bond with their boys.

The rest of the day seems even frivolous to mention but again our eyes were exposed to so much. We saw the palace destroyed by the earthquake, and then stopped at the main cathedral in Port Au Prince. Once again we all felt and witnessed the poverty stricken people of Haiti in a very close and personal way. Some looked to still be injured from the earthquake while others were so frail and hungry that they begged us for food. As they started surrounding us our driver became uncomfortable and we were quickly moved towards the truck and on to our last stop. An amazing overlook of Port AuPrince where the first family picture of the 5 Ramey’s was taken (unless you count the one of the three boys and their Dad peeing on the side of the road).
This week, Todd and Laura’s hopes to see their boys kept getting postponed as things often do in Haiti. First they thought they would see them Friday, then Saturday…but it was Palm Sunday that God chose to bring them together. What a Glorious Day it has been to each of us.

As Chet and I have written this entry together he kept coming back to the following scripture which we will leave you with:

As they approached Jerusalem and came to Bethpage and Bethany at the Mount of Olives, Jesus sent two of his disciples, saying to them, “Go to the village ahead of you, and just as you enter it, you will find a colt tied there, which no one has ever ridden. Untie it and bring it here. If anyone asks you, “Why are you doing this?” tell them “the Lord needs it and will send it back here shortly. They went and found a colt outside in the street, tied at a doorway. As they untied it, some people standing there asked, “what are you doing, untying that colt?” They answered as Jesus had told them to, and the people let them go. When they brought the colt to Jesus and threw their cloaks on the road, while others spread their branches they had cut in the fields. Those who went ahead and those who followed shouted, “Hosanna! Blessed is he who comes in the name of the Lord! Blessed is the coming kingdom of our father David! Hosanna in the highest!”