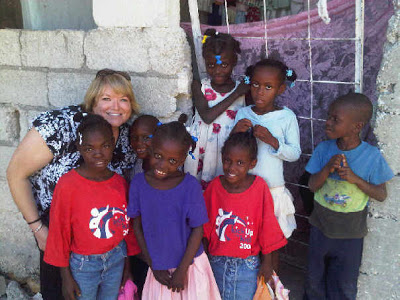 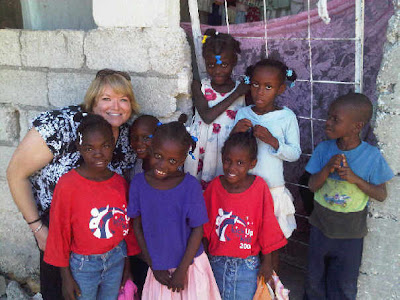 Tonight I’m sitting in Haiti ready to tell you some stories, but it’s occurred to me I might start at the beginning.

Over the last couple of years as we’ve prayed for direction on where else we could minister, many countries presented needs to us. In my world we’d give beds and bedding to every kid who sleeps on a broken metal bed, urine-soaked thin cotton mattress, filthy piece of Styrofoam, on the floor or in the gutters. Our budget makes my world a hard place to live, and so I wait for God to lead us and pray for patience.

Haiti was a country which had been in our prayers for a long time, however I just never really felt God give me any confirmation that was our place to serve. About this time last year, Jon came into the office telling us he thought we really needed to prayerfully consider Haiti again. We listened to him tell us about an orphanage which had suffered extreme damage from the recent hurricanes and subsequent rock and mud slides. The children had lost nearly everything.

A couple days later Jon had pictures of the orphanage, the splintered beds, cars covered with rocks and mud just everywhere. He said he had heard the lead singer of Audio Adrenaline, Mark, share about this need on his drive in to the office. Turns out Audio has a nonprofit called Hands and Feet which supports an orphanage, this particular one, in Haiti. Again we listened and looked over the pictures. Jon seemed certain we should respond and begin our ministry in Haiti. I needed to pray more. I needed the proverbial “sign”.

Two weeks later, just before Thanksgiving, we were exhibiting our Build-a-Bed program at a Children’s Pastor Conference in Nashville and were headed home from a long day. As we were leaving the event we heard a band close a song and somebody began to talk. Stuart said it sounded like Mark from Audio. I looked in the room as we walked by and saw their Hands and Feet logo on the screen and said I thought we should just listen to him talk.

Mark shared the story we had listened to Jon tell us…showed the same pictures. It was good to hear the story from him, but I stood there telling God I just wasn’t sure if “this” was where He was leading our ministry. Then, Mark shared another story and changed all of that.

On July 8, 2007, a young boy watched as a pregnant teenage girl walked up the hill past his front porch on her way to the latrines up the road. A while later this boy saw the same girl walking down this hill…except it was clear she was no longer pregnant. Instantly the boy knew what had happened. In Haiti many newborn babies’ lives end when their desperate and destitute mothers literally throw them away at birth. The young boy knew this girl had gone into the outhouse to deliver her baby and leave it there.

The boy quickly ran up the hill and opened each door, looking down into the deep concrete hole to see or listen for a baby. Finally, in the third toilet, he found what he had prayed he wouldn’t: a newborn baby’s faint cries coming up from the deep, dark, wretched sewer hole.

He tried frantically to think of a way to reach the baby and finally ran to get some friends. They tried desperately by lowering each other as far down as possible, but the hole was much too deep. Finally they ran to look for help and found it in the form of some UN soldiers from Sri Lanka.

The soldiers carefully broke apart the concrete walls of the sewage hole so it was large enough to lower a man into the depths to reach the baby. Much time had passed and the cries from the infant were quieter and further apart.

Shockingly, there’s footage of this rescue. Once the soldier had been lifted down into the excrement and found the baby, he wrapped the infant in a sheet that was then secured to a rope and lifted up onto the surface. Once unwrapped they found a baby girl, still alive, and rushed her to the hospital. Incredibly, the baby girl didn’t have a single broken bone, cut or problem. What a miracle.

That story, combined with the video footage they showed, is without a doubt heartbreaking and moving. However, what got me more than anything else was the date Mark had said all this happened on: July 8th, Galina’s birthday.

Galina is a young teenage girl from Eastern Europe I’ve had the blessing of watching grow up over the 5 years—now two of which have been with me here in America. I brought Galina here because I absolutely felt God telling me to do so. Honestly, it was such a leap of faith for me and didn’t make sense to anyone, certainly not me. What was I, a single woman who traveled a lot and didn’t make a ton of money working for orphans and Jesus, going to do with a teenage girl? Apparently God didn’t really care about that and so opened the doors for her to come live with me and have opportunities she wasn’t going to have in Moldova: a chance for a high school and college education.

At the time I heard Mark’s story Galina and I were just shy of her first year in America. For the sake of this story, I’ll tell you the first year was beyond any difficult experience either of us had ever had. There were so many times I asked myself if any of what we were going through was worth the struggle, how things might turn out and what on earth God was doing to each of us in the process.

From what I can see, there’s really no reason Mark needed to mention the date when he started his story. Who knows if that’s always how he shares this miracle, but that night as I stood in the back of a room leaning against a wall crying, I knew God had let him share that date with me for a very specific reason: to remind me if we give everything to save just one life, that is a life everything is worth. There was my sign.

So, Haiti. More on our work tomorrow. Oh, and that little girl…today she is the absolute most precious little girl who has been adopted by Mark’s parents who run the orphanage she was taken to after leaving the hospital.