Before I started writing this post last night, we were told to conserve electricity because the country’s electric power was not working and neither was the orphanages generator. So the orphanage was running on backup battery power. Soon after I started, the backup batteries died.

There’s a reason they call these “Mission’s Journeys” and not “Missions Trips”.

After a long day of traveling, our team made it to the orphanage in Port-a-Prince Haiti. We started our day at 4:45 am at Nashville International Airport. A couple of hours later we were in Miami for a five hour layover. Once everyone was boarded our flight to Haiti, the pilot informed us that there was a mechanical problem closing the cargo hatch door. It took over an hour to fix the cargo hatch.

Fortunately, we had an uneventful flight to Port-a-Price. On approach, we got a birds-eye view of the damage and tent cities. Suffice to say, it has a different impact on you when you seeing it outside an airplane window as opposed to on TV.

We knew we weren’t in Tennessee anymore when we saw the cargo hanger that served as immigration, customs, and baggage claim. (Don’t mind the date stamp, I bought a new camera for the trip and I hadn’t set the date yet) 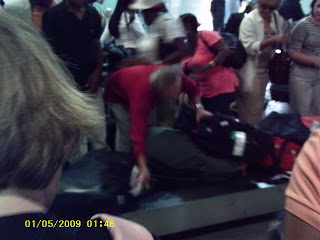 Our drive from the airport to the orphanage was interesting, to say the least. Below is a picture of the traffic in Port-a-Prince. 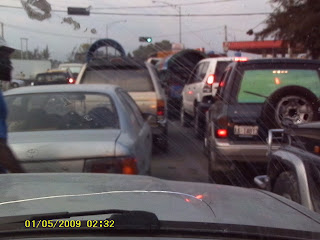 I promise to never complain about traffic in Nashville or at Brentwood Baptist Church ever again.

On the drive, we passed one of the large tent cities that has been in the news recently. It is built in a dry riverbed and there is a need to move the people and tents to higher ground before rainy season starts. 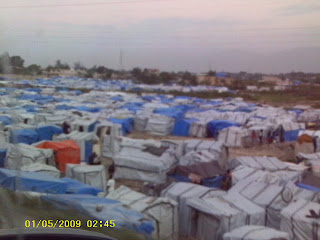 When we arrived at the orphanage, we were greeted by 70 kids who were waiting for us. We spent the next hour playing with and getting to know the kids. It was amazing to see how friendly the kids were. Almost every kid asked my name and wanted to see my watch.

We were told later at dinner that most of the kids at the Global Orphans Outreach transitional orphanage had at least one parent. Many of the parents have made arrangements with the orphanage to look after their children while they are looking for work, repairing their homes, and other earthquake related reasons. It’s nice to know that we’re able to show the kids love and attention while their family is regrouping from the earthquake.

All of our team members are doing great. We’re excited to see what God is going to do through us and with us on this trip.