THE JOURNEY: DAY 1
“It is upon this background that one of Sweet Sleep’s staff was prompted to make a visionary trip together with a team of 6 members from [the indigenous partner organization]. The team was to minister alongside with Sweet Sleep during what was referred to as the second phase of their repatriation exercise in Karamoja region.
It was around 2:30am on the windy morning of 16th February 2013 when I set off on a Boda Boda in the company of my husband and headed to one of the bus terminals in Kampala in order to join the team together with the 21 children and 7 adults/guardians/parents who were to be returned back to their homes in Karamoja.
Upon my arrival at the bus terminal, I found that the team had already arrived and was warmly welcomed by Diana Ssemyalo the head of Social work department at the partner organization. I was quickly introduced to the other members of staff, to the children and we immediately started loading all of our belongings on the only old bus that was yet to leave for Karamoja a few minutes later. Among the 21 children who were to be returned to Karamoja, 13 of them were in school going age while the rest were still too young for school. 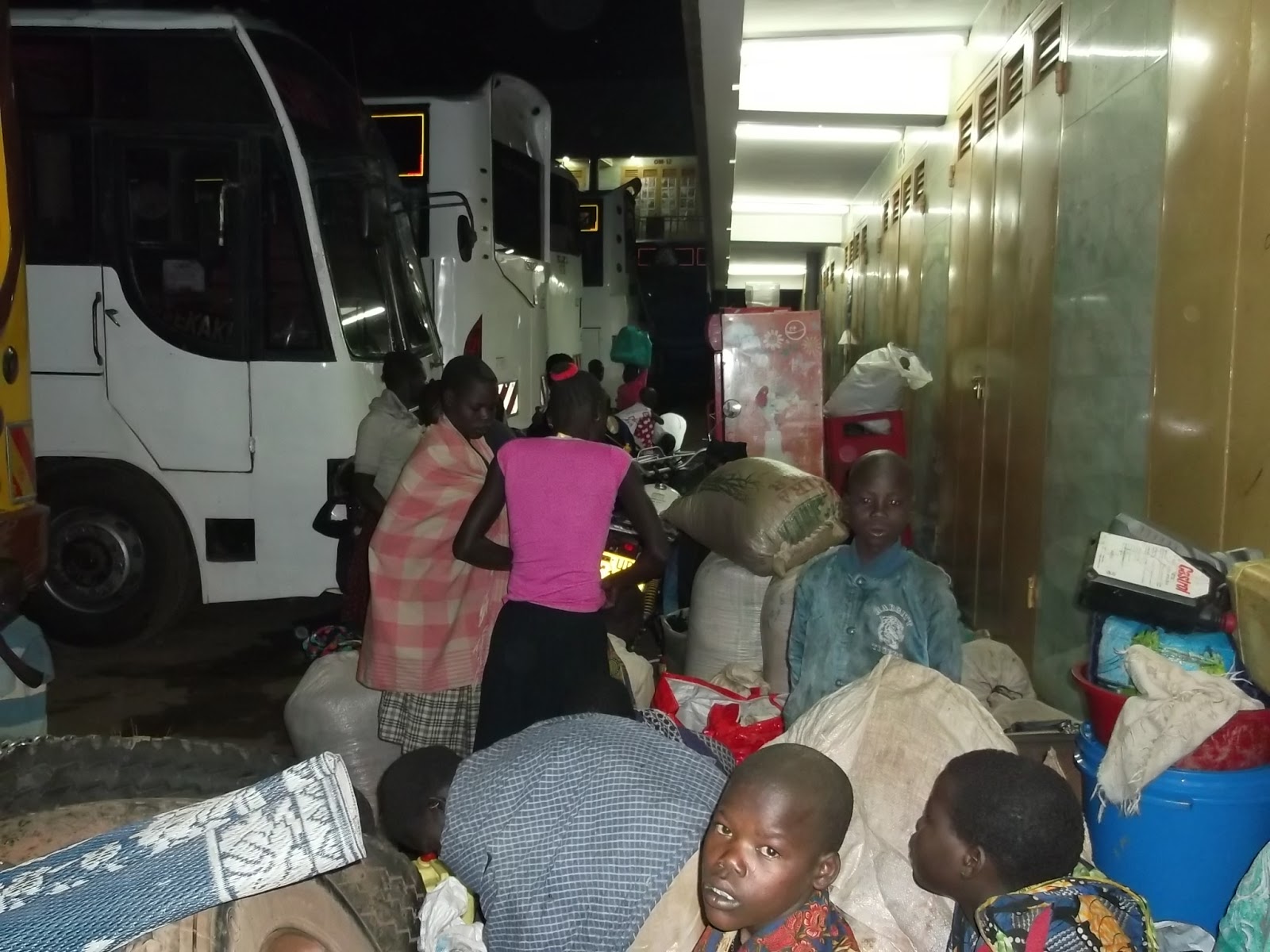 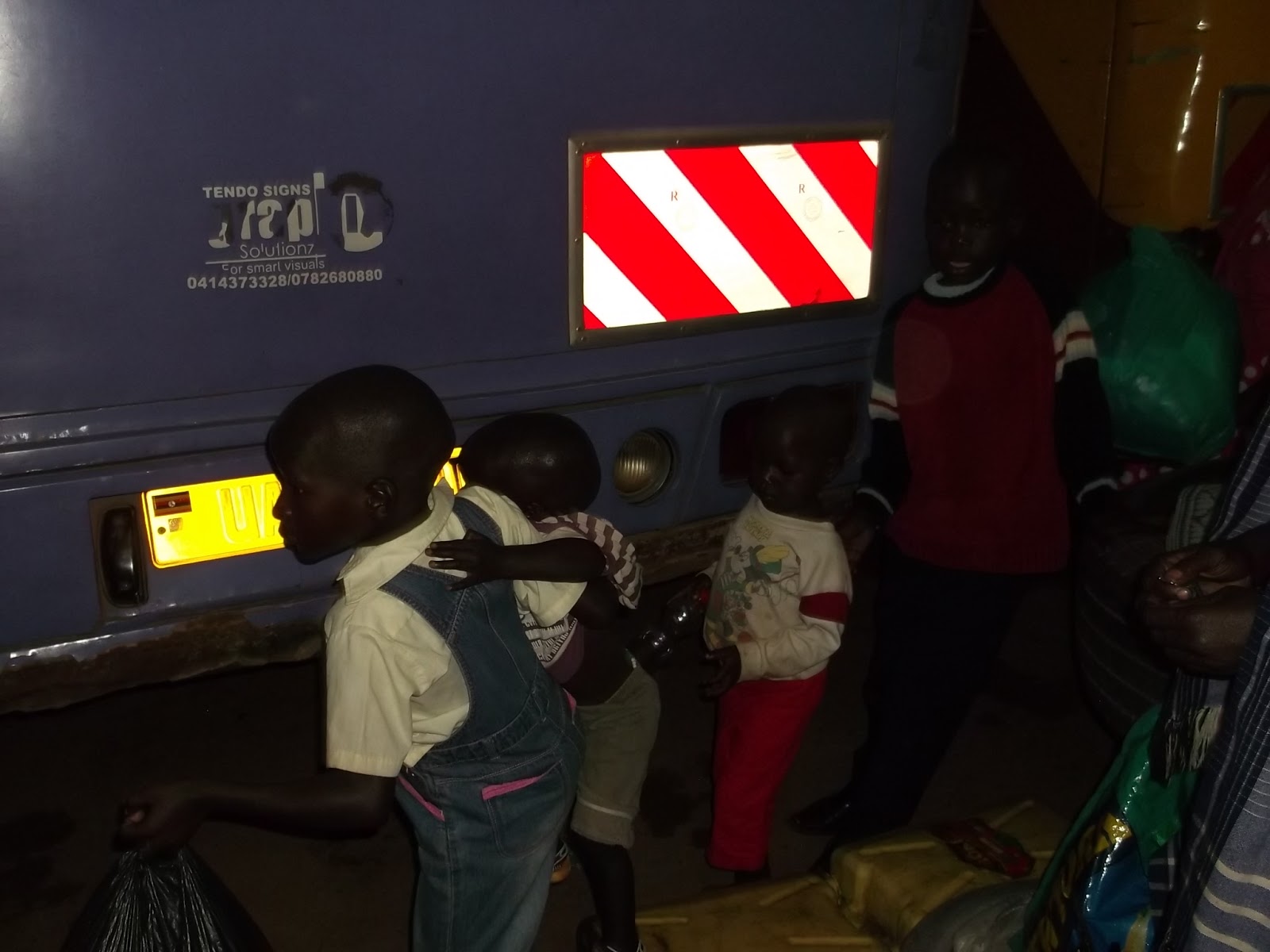 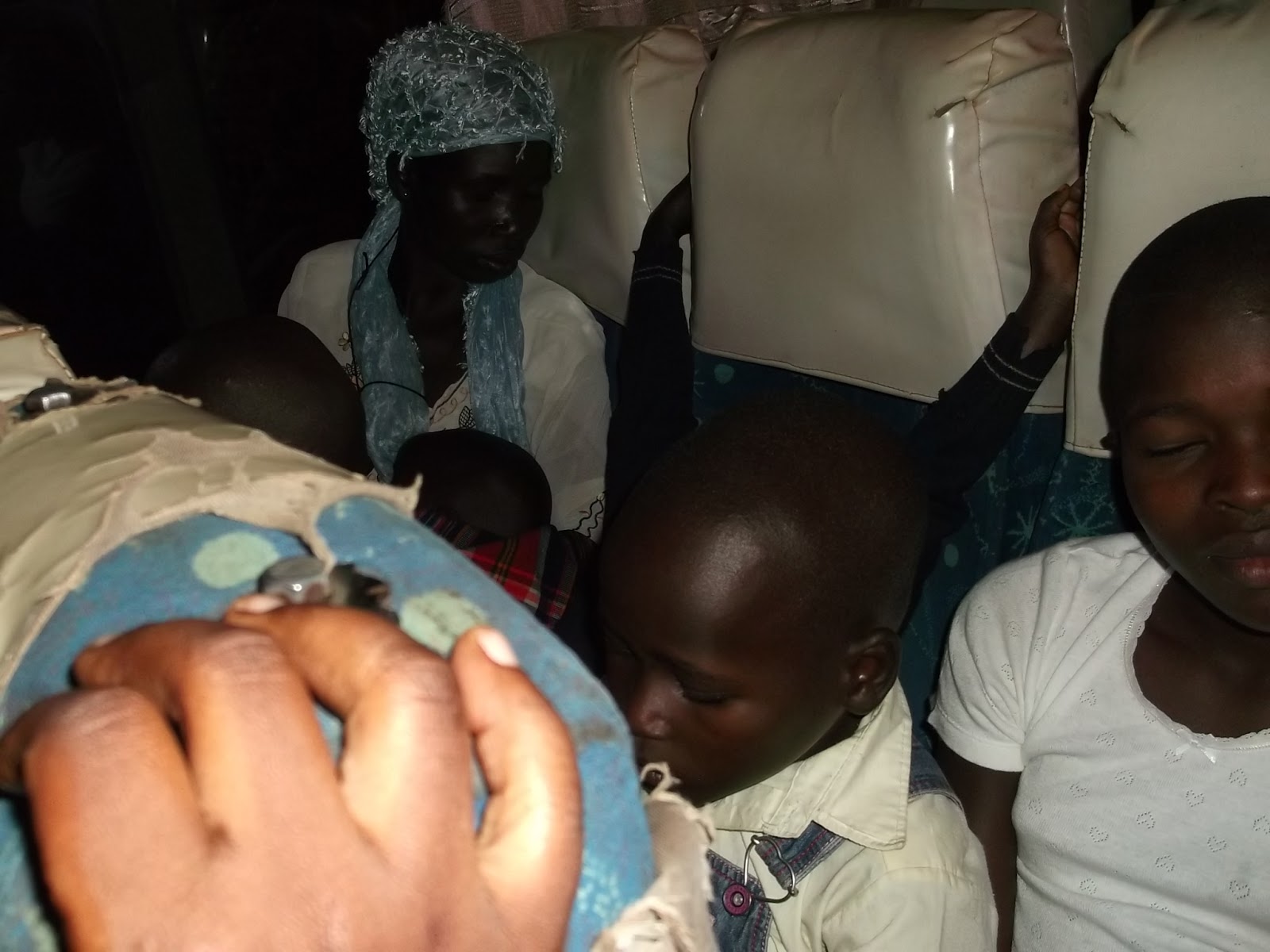 Loading all belongings and getting ready for the journey while some children were already struggling with sleep immediately after boarding the bus.
Amidst a lot of excitement, I continued to work hand in hand with the team and to ensure that every belonging for us and the children was put on the bus. Among the items that we traveled with were mainly resettlement packages for the children which were provided by the partner organization and these included exercise books, food stuffs, hoes, pangas, cups, soap, plates and cooking oil just to mention a few among others.
After spending a while at the bus terminal putting everything together, more people kept on boarding the bus since we had used public transport until it was full to capacity. In a day, there is only one bus that travels to Karamoja and this explains why people are always over packed together with their belongings.
At this point, it required one to have a lot of patience and to completely understand what God has called him or her to do as children started crying because of different reasons. Some of them wanted something to eat or drink while others needed to go for short calls. A lot of care and love was required from each of us to be demonstrated to these children as mixed feelings could be easily read on the faces of both the children and their guardians. 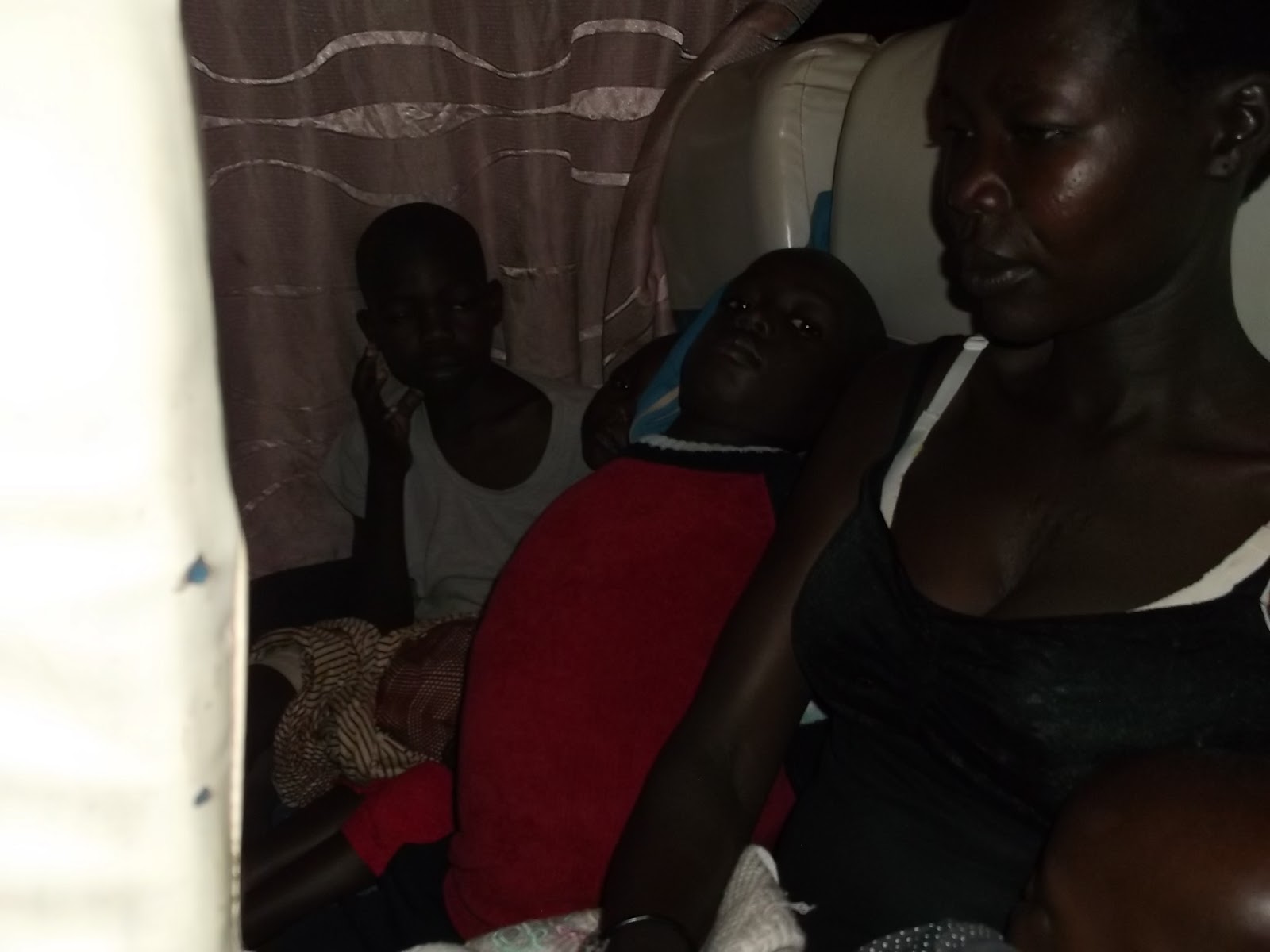 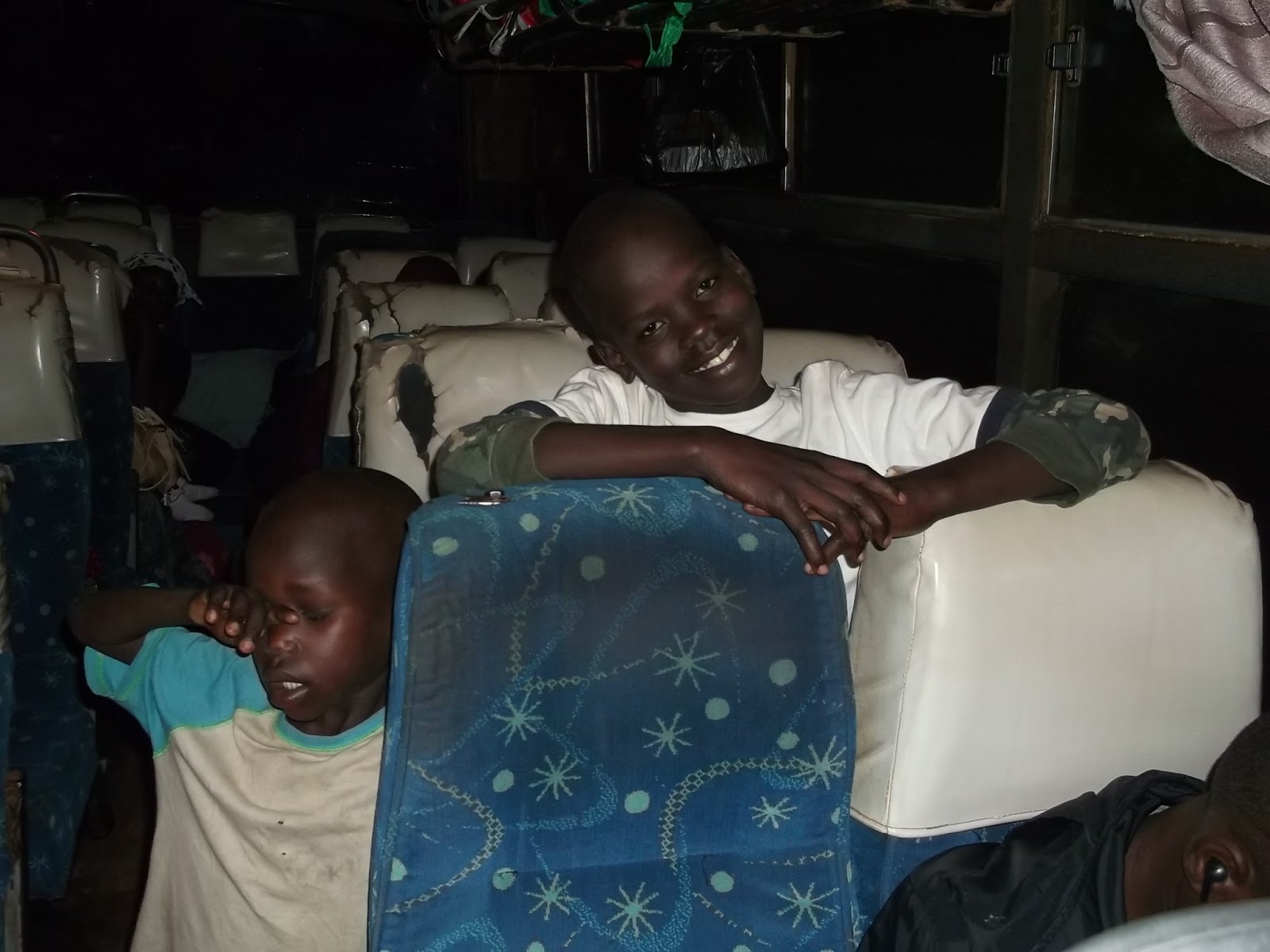 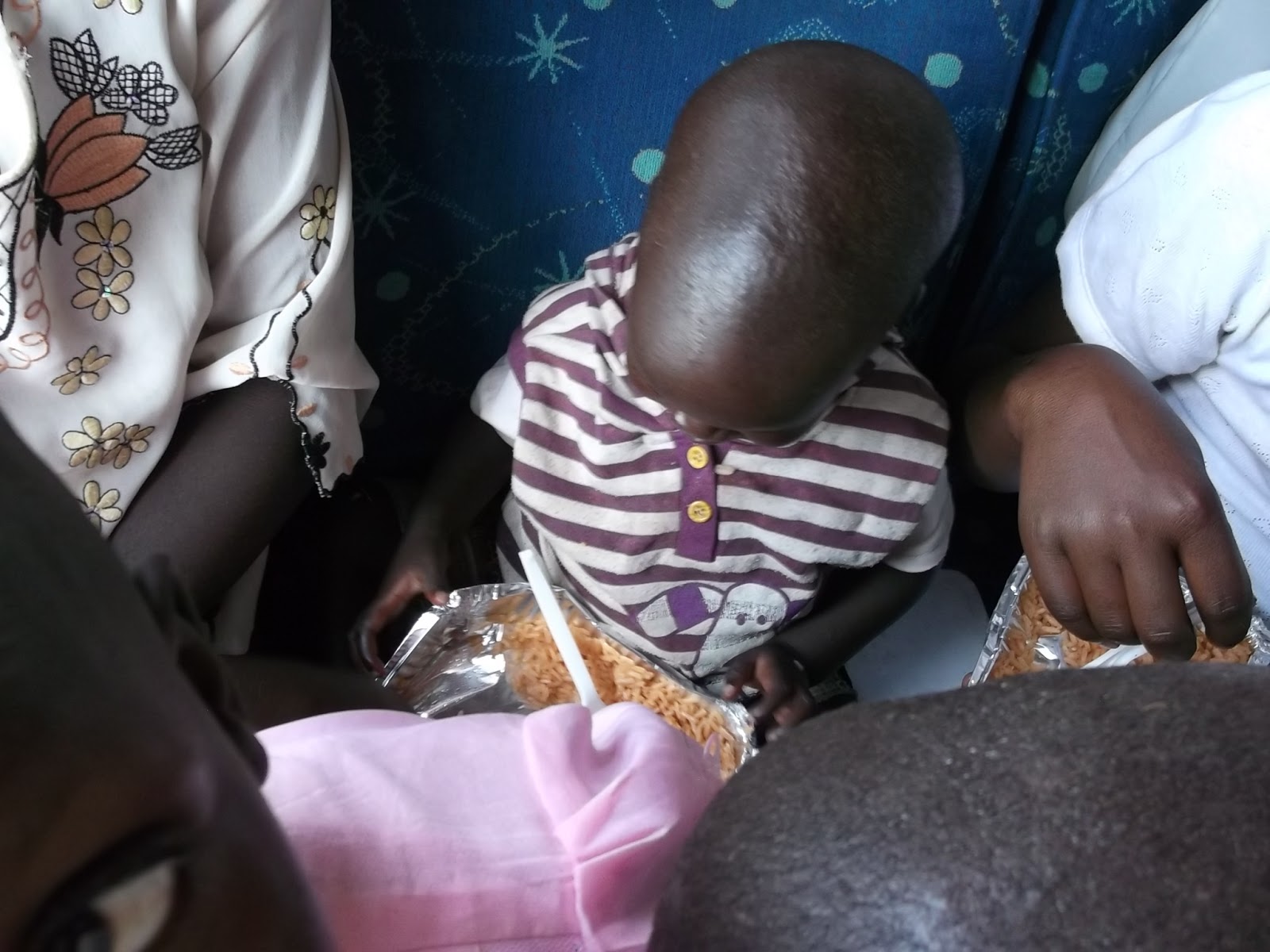 Some of the caretakers of the children could be seen in deep thoughts while some children were happy to be on the bus and excited with the journey.
It was at around 4:30am that we embarked on this breathtaking journey to the land of Karamoja. Karamoja region is located in the North East of Uganda and is bordered by Kenya to the East and Sudan to the North with a population of about 1,017,400 according to the Uganda Bureau of Statistics 2008 population programmes.
After traveling for a while, the children started singing songs and rhymes that they had learned at the indigenous partner organization during their rehabilitation process and to date I can still hear their lovely voices singing the song “LONDON’S BRIDGE IS BREAKING DOWN” especially as the bus approached and crossed the Owen Falls Dam Bridge at Jinja in the East of Uganda.
The singing proved that the children’s minds had been well prepared for this moment and some songs appealed to one’s emotions on how some people are neglecting to take care of their children and also urged parents to embrace love and forgiveness.
At Jinja we had our first stop over in order to refill gas which was followed by another stopover in Iganga town where some children wanted to have some break amidst a lot of complaints coming from other people on the bus for they were so much being inconvenienced by the noise of the children. With nothing much to do for the children apart from proceeding with the journey, the bus arrived at Mbale where all the children got off to ease themselves. It was at Mbale that the bus had by mistake left some of the children together with some of us who had gone to help the children out. We had to chase the bus and thanks to the driver who eventually recognized that he had left some passengers behind and stopped.
As the clock ticked towards 10:50am, we reached Kumi district and we started serving some food stuffs to the children which included packed Chapatis since they had indeed travelled a very big distance without much to eat.  We continued with the journey and eventually passed a beautiful lake at around 11:56 am which I came to know as lake  Awoja and it is located in Weri village along Soroti road. By this time, most of the children were now asleep and those awake were looking with exhausted faces. 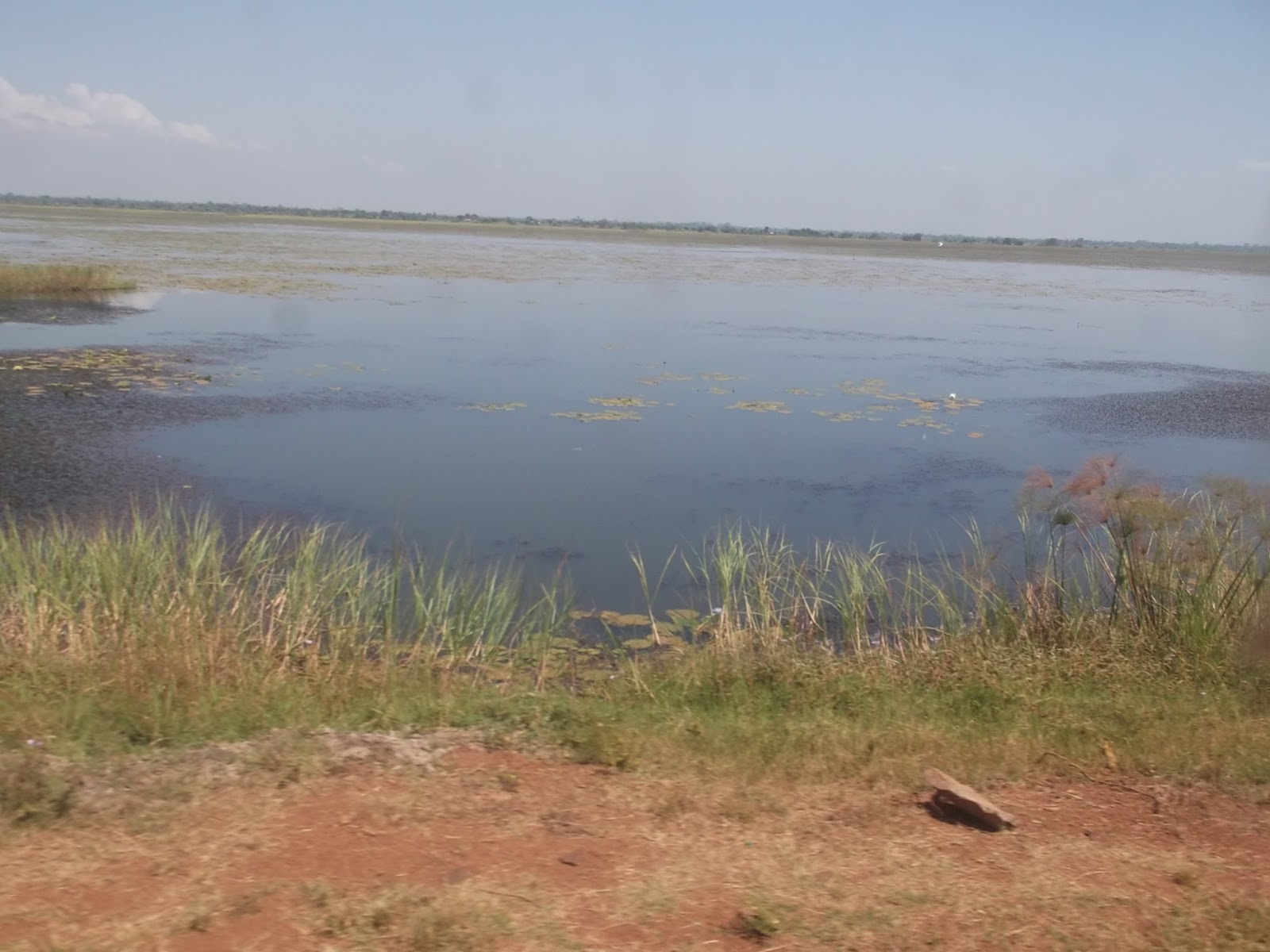 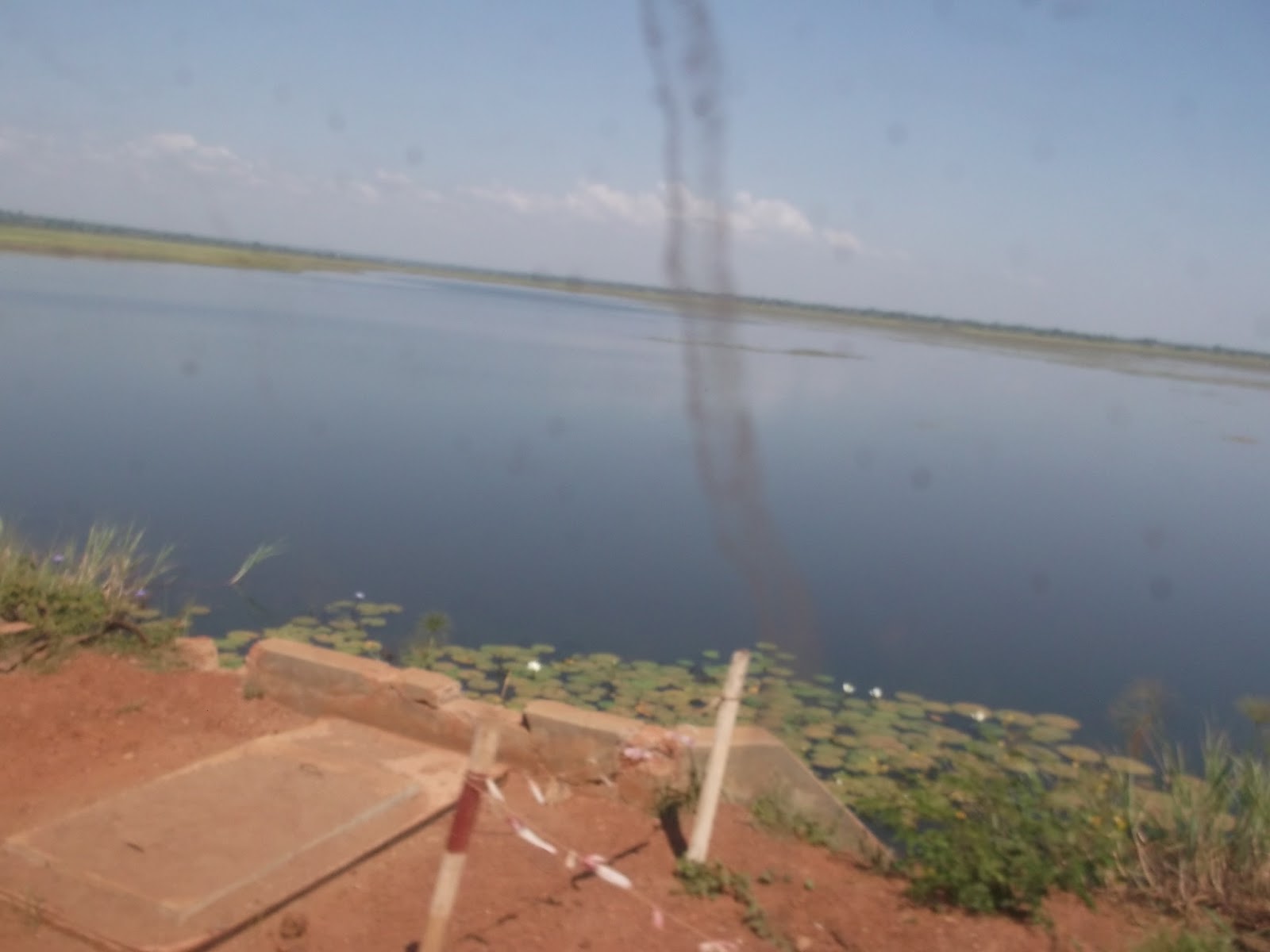 A clear view of lake Awoja in Weri village along Soroti road
On our arrival at Soroti, more trouble cropped up as more people were found waiting for this very bus to take them from Soroti “Bus park” to Karamoja. As the bus became more and more loaded, a lot of heat intensified in the bus because it was mid-day and very hot outside. The heat could not be bearable by the children and they started crying for water. With the help of the driver, we managed to squeeze ourselves out of the bus so as to get some drinking water for the children but the water could not do much as the children continued to sweat a lot and to feel thirstier. 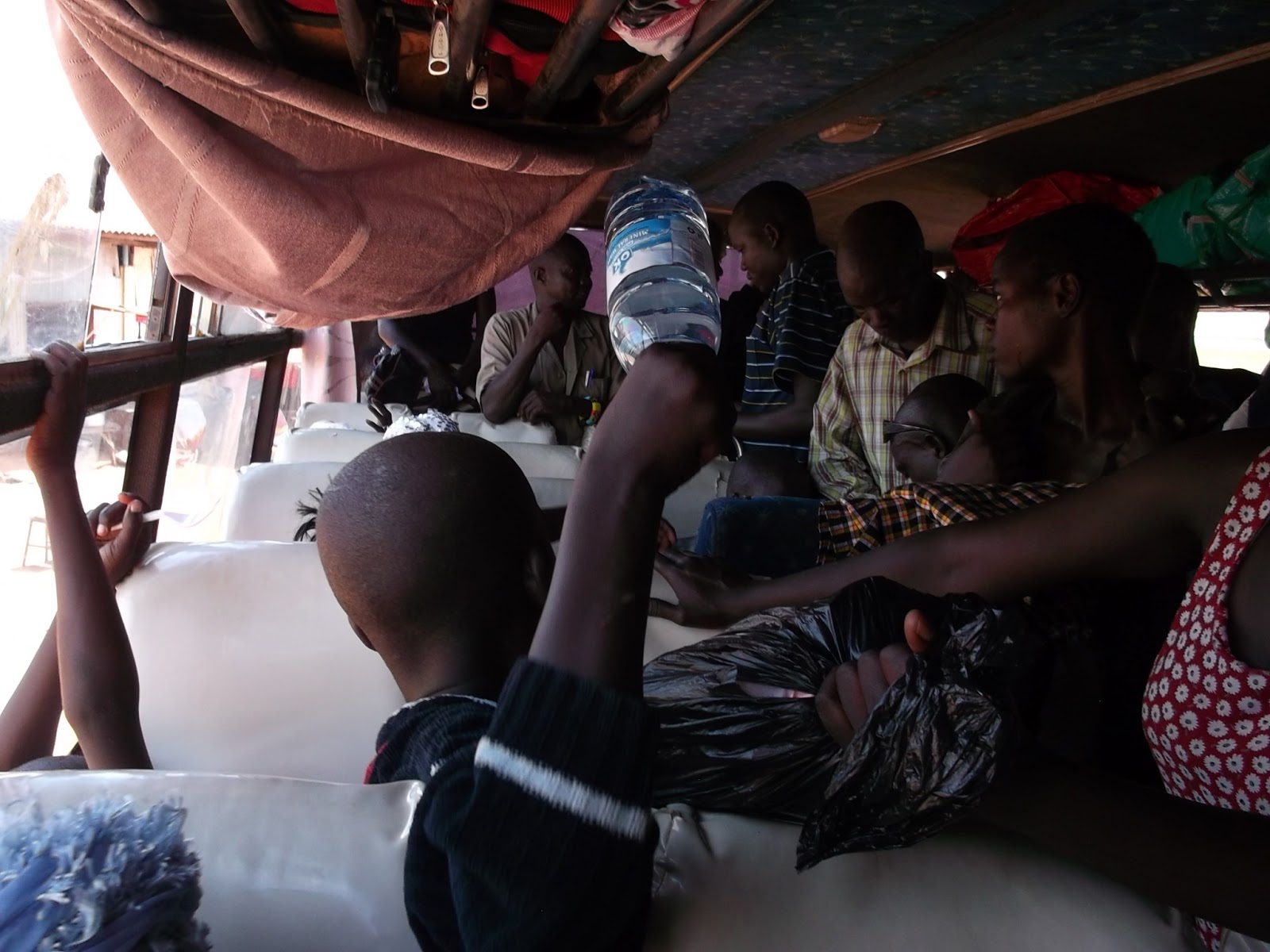 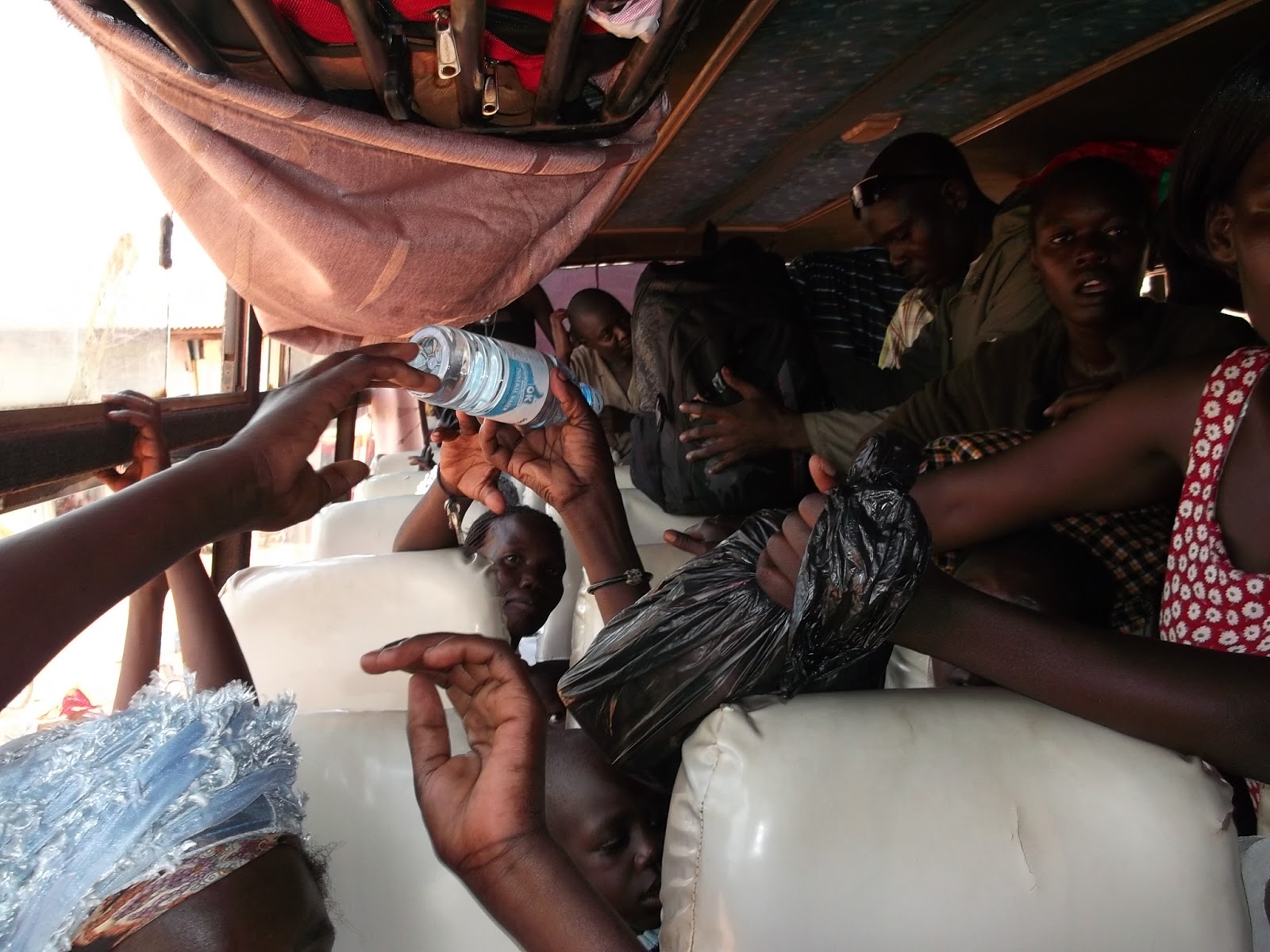 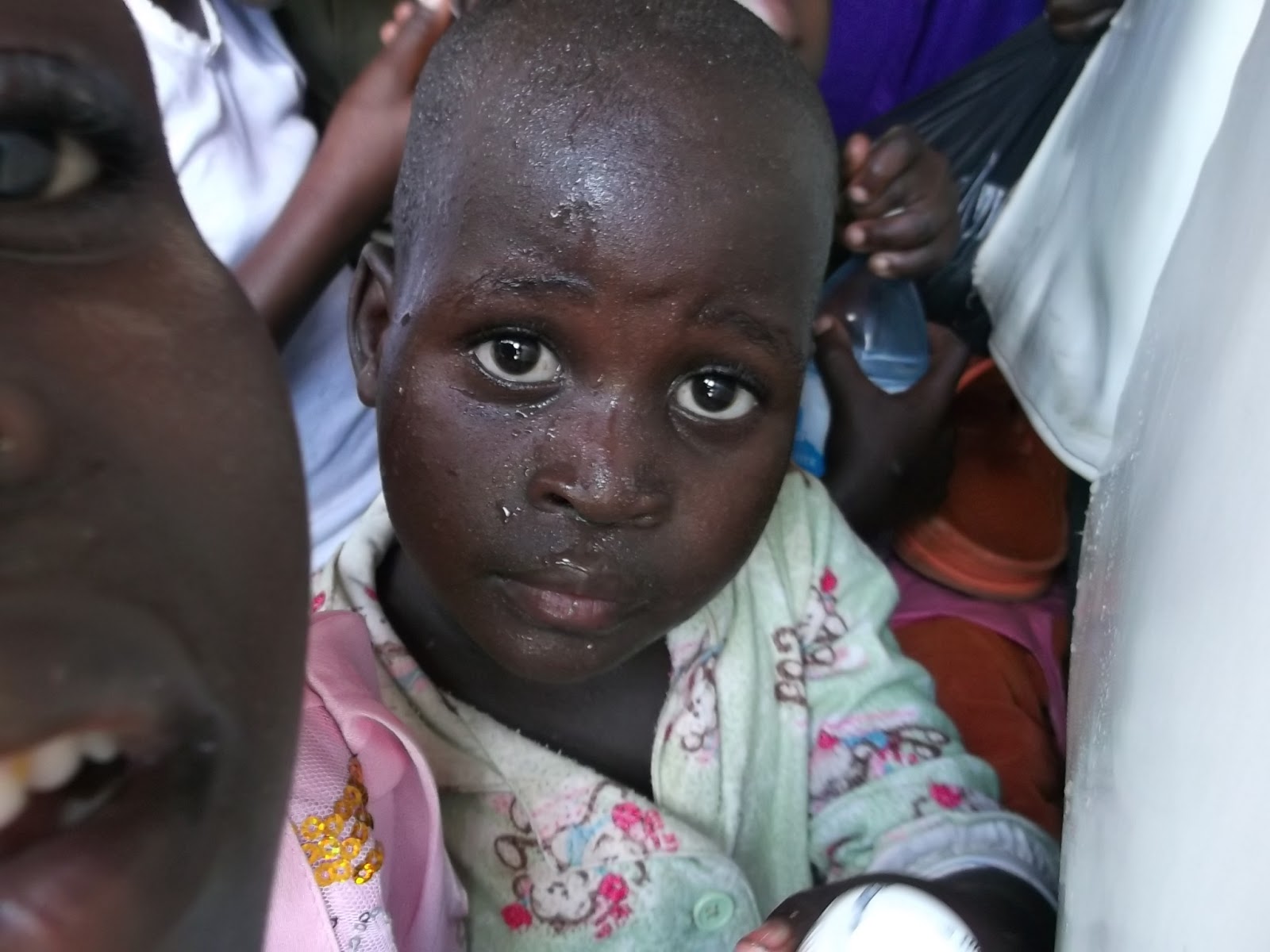 Struggling for fresh drinking water while to the right one of the children with sweat all over her face and body.
Moving through Soroti was totally a different experience and at some point I believed that God had spent some time indirectly preparing me for this kind of experience and within me I prayed to God to provide us with all the strength and courage as we continued to pass through this strange land. With all this at the back of my mind, some children intensified crying while others started wetting their pants and the kind of odor within the over packed bus was indeed terrible.
As we moved further away from Soroti, I felt myself engulfed by a lot of sadness as the land we continued journeying through was so dry, flat and very sparsely populated when you compare it to that land elsewhere in the areas that I have ever been to. While moving through this land, one could easily observe that people were not having the best life at all for most of them had faces that portrayed sadness. The common languages that I had them speaking were Swahili and Nakaramojong.  At this point, I took the courage to ask one of the staff where we were and that is when I was made aware that we were already in Karamoja region and the bus was heading to its destination in Moroto town where the bus park was. 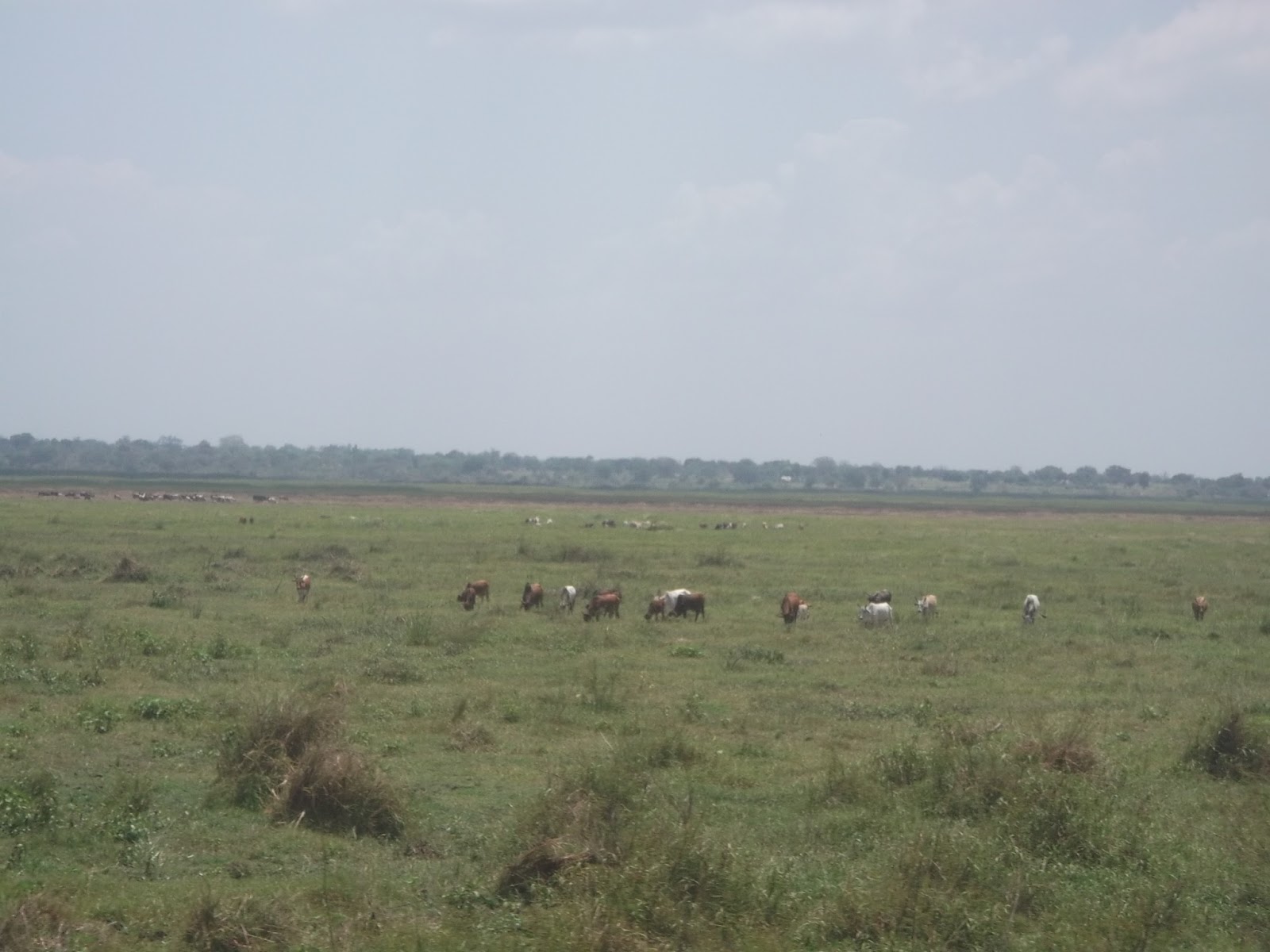 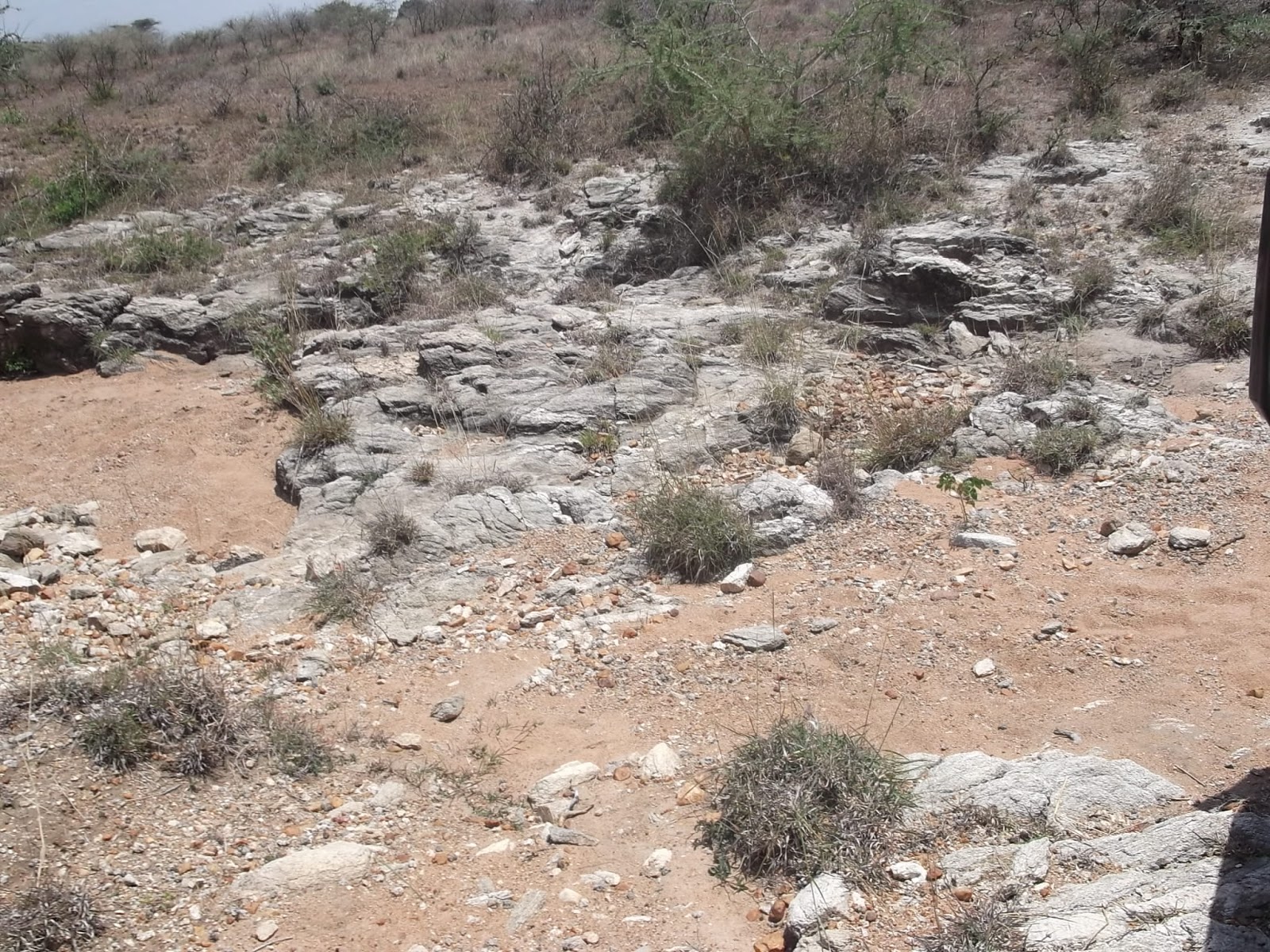 Cattle trying to graze on the dry flat land 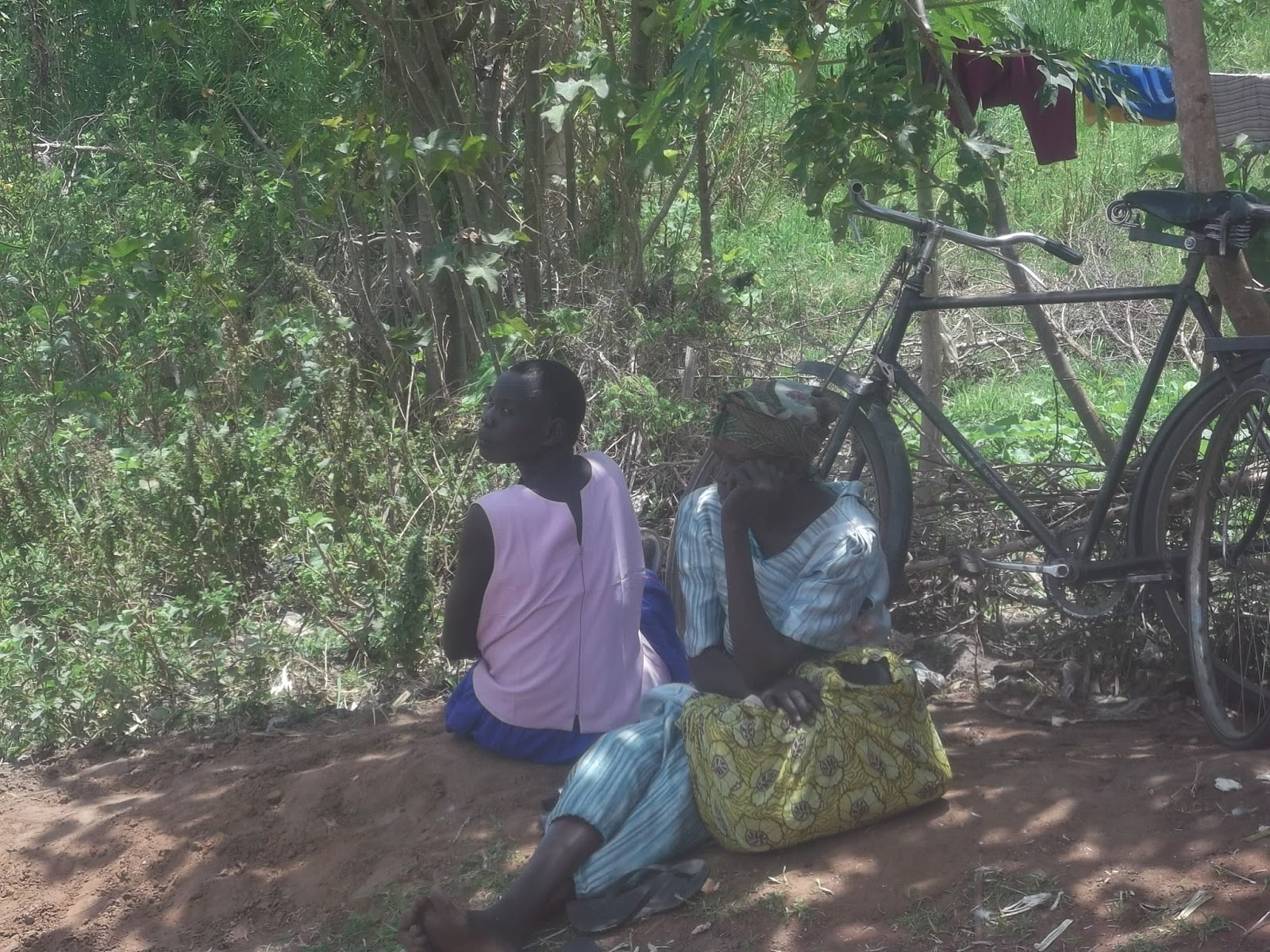 Thinking about a better tomorrow
During our drive towards Moroto town, it is easy to observe that transport is a problem as people could be seen walking distances. There are no taxis in this region apart from lorries and some pickups that are always used to transport both people and animals especially cows. On the side of trading centres and markets, they are very distant from one another with very few commodities that can be used in daily life. 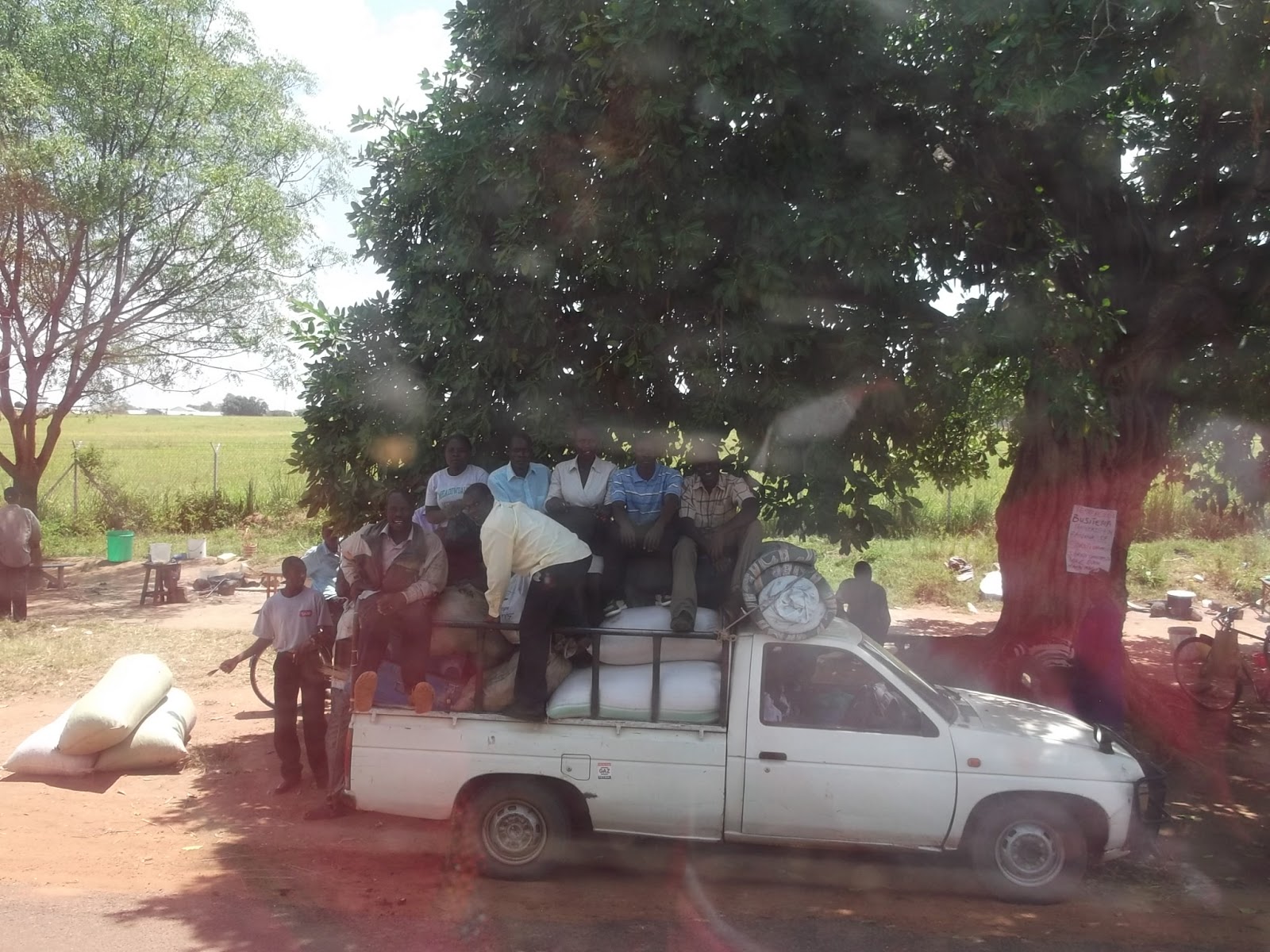 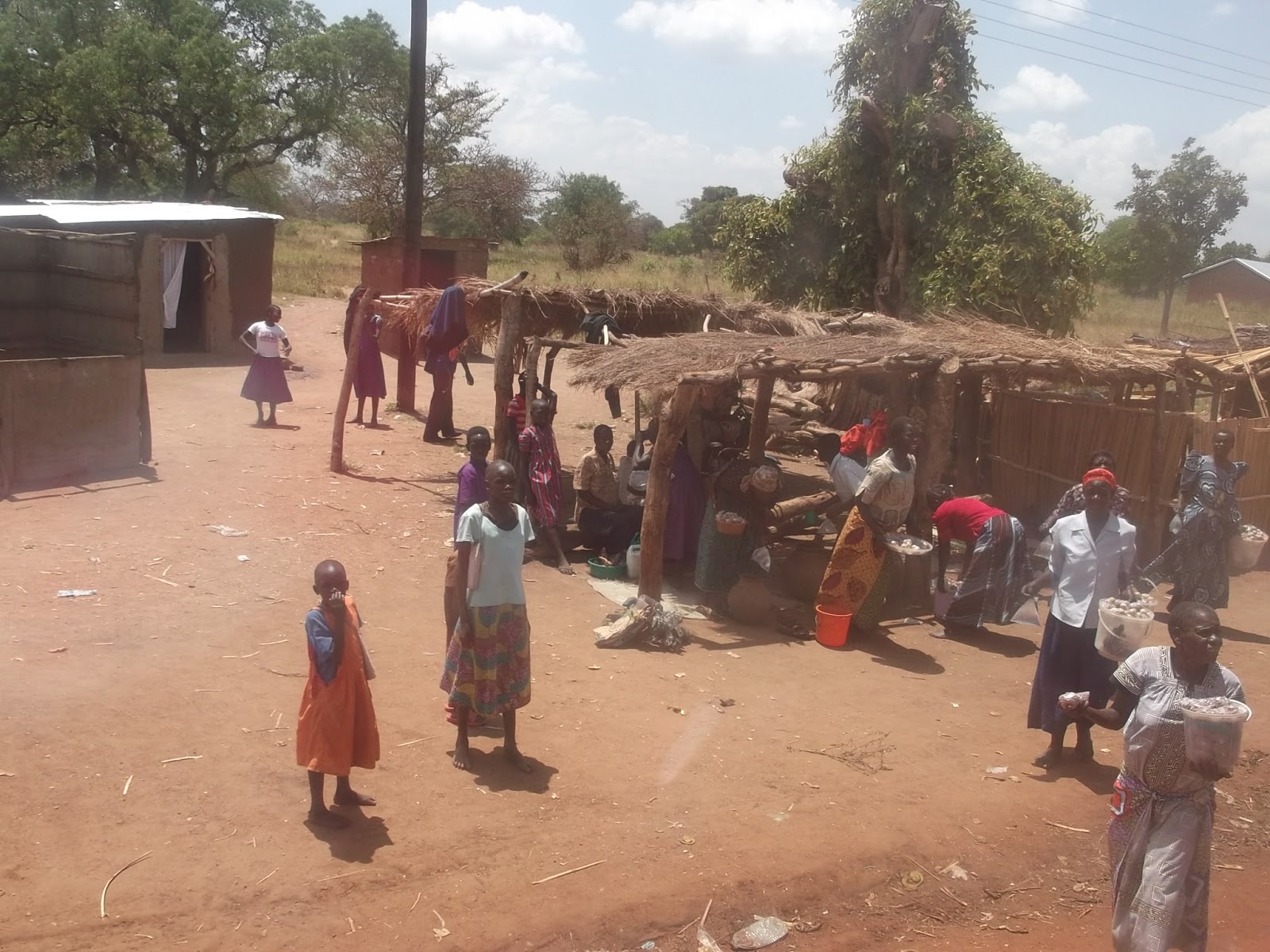 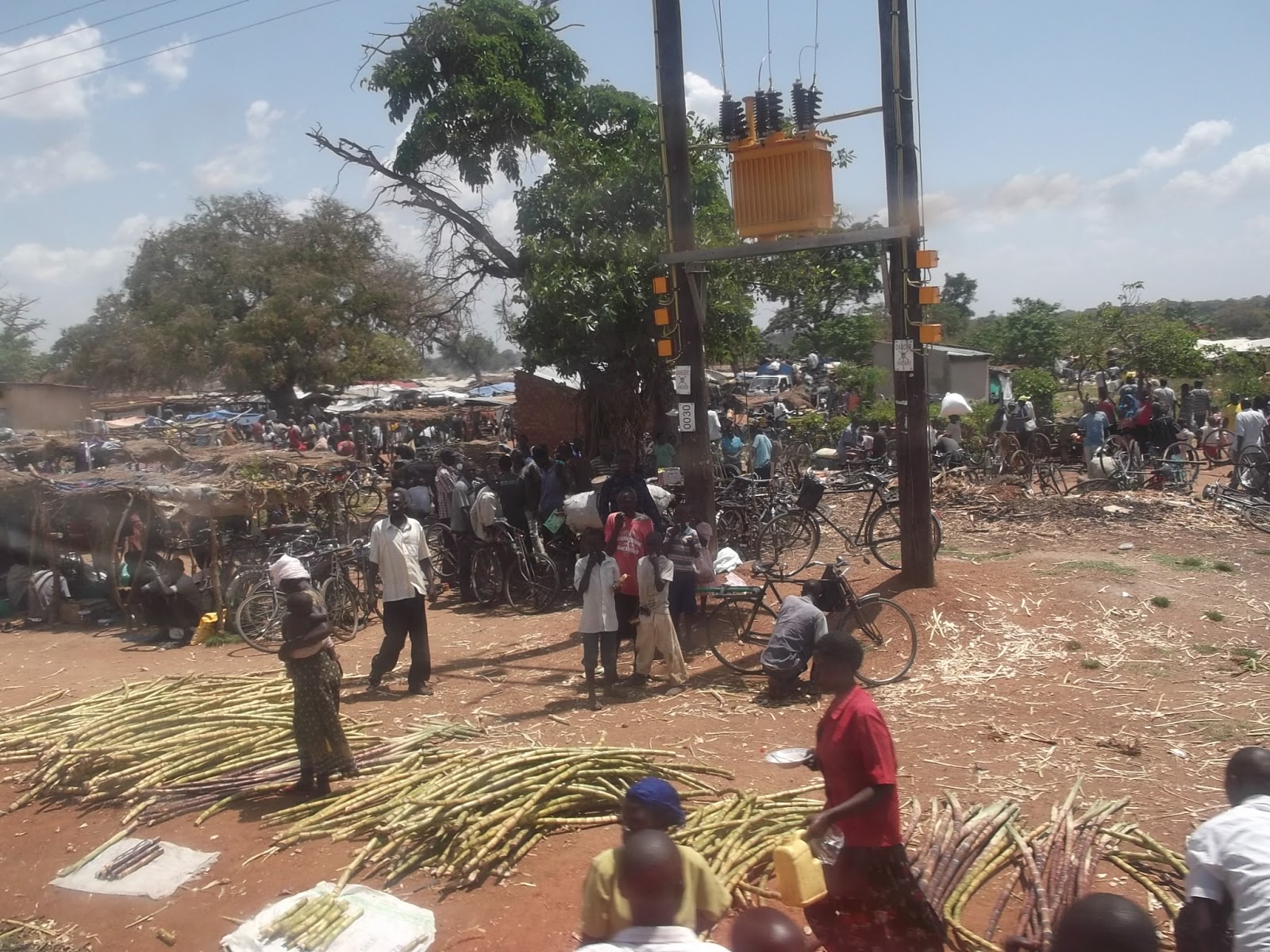 At around 5:55pm, the bus arrived at Moroto “Bus park” which was its destination but unfortunately we had no car to help transport us together with our belongings from there to the next destination where we were to be accommodated during the rest of our time in Karamoja. We had to wait until 8:40pm when all of a sudden some members of staff from the Community Development Centre organized and hired a fork lifter like truck that helped us to carry most of our belongings. Since the truck could not carry us together with our belongings, we had to walk with the children for about 30 minutes until we reached at the Community Development Centre where we were to be accommodated during our time in Karamoja.   The Community Development Centre is a community based organization that collaborates with the indigenous partner organization during the tracing of families for returnees and resettling them. There are dormitories built at the Community Centre that help with accommodating different teams of their partners that come to minister within Karamoja. The Centre has other various facilities like conference rooms and other recreation facilities that can be used by the children before uniting them with their facilities.” 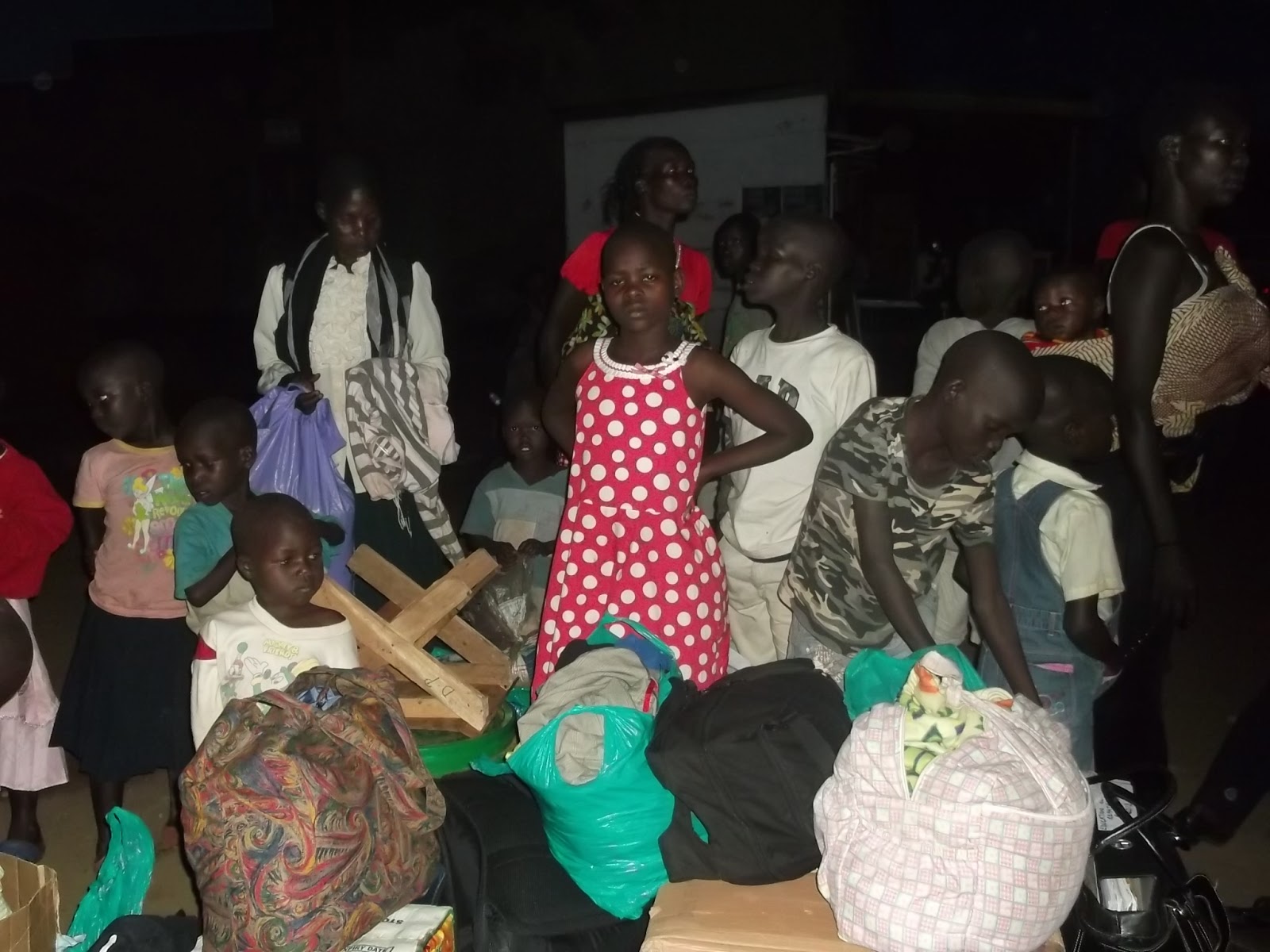 Still waiting at the Bus Park for help. 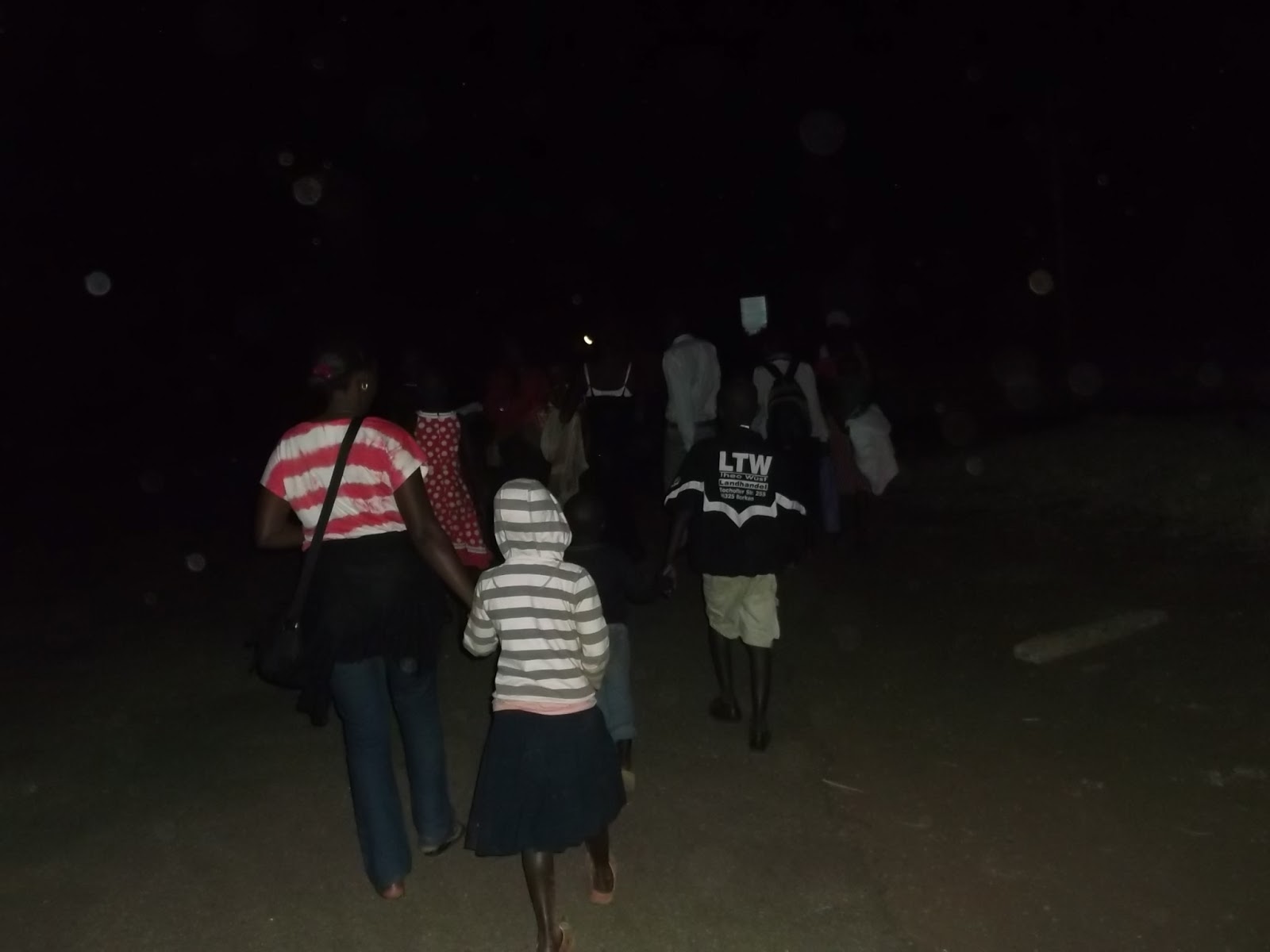 Walking with the children to our final destination

Please join us tomorrow for Day 2 of Josephine’s Journal.