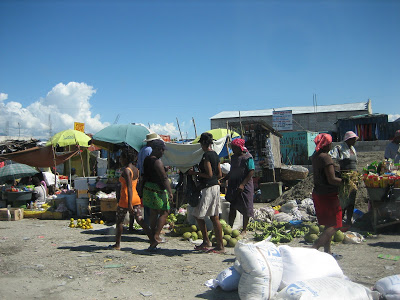 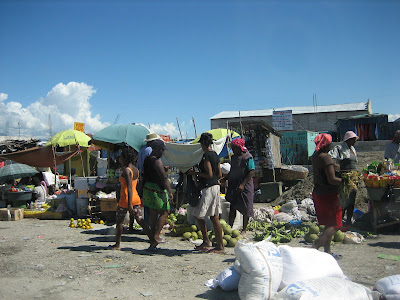 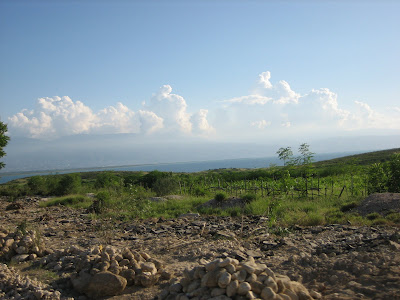 There’s really no way for me to sum up what we’re learning or seeing, other than to just share it with you as we have experienced it. So, welcome to our Haiti scouting trip.

As everyone at home began to hear we were going to Haiti we would get one of two reactions:
1. “Oh, you’ll love it. The people are so kind and the need there is so great.”
2. “Oh, you’d better be careful. Haiti is dangerous.”

We arrived and had no problems at the airport. Security randomly picks people to go through their bags (for those of you who are old Moldovan team members, it’s kind of like that). Stuart and I used the ol’ “don’t make eye contact and act like you know exactly where you’re going” trick and walked right on out.

Our on the ground partners and guides for this trip, Sandra and Pastor John, were outside waiting for us and off we went.

I remember when I was a little girl I thought New York City had to be the most dangerous place in the world to be. I didn’t have any experience to back up this thought, but it was the conclusion I let myself come to from hearing news stories or people talk about things that happened there. One summer, while growing up, my family drove through NYC on vacation. I vividly remember sitting in the back seat with big eyes and a racing heart. I looked at every store front , every car and alley I could—just waiting for the moment when I would see an armed robber jump through the glass window to make off with a bag of money or plastic bag full of Statue of Liberty figures. I remember being really disappointed: New York just didn’t live up to the hype.

Haiti reminds me a little of that trip to New York. The hype that half the people had reported to us had my little mind expecting to see Haitians running down the street waving guns in the air or mobs setting fire to cars. On the contrary, everyone in Haiti seems to be too happy or too busy doing whatever in the world it is they’re doing to brandish a gun or burn anything.

We’re staying at a mission house which shares a compound with a children’s home that is on the opposite end of the property. In the two days we’ve been here there’s been a revolving door of people who’ve made our meals more interesting. The property is extremely close to the airport, so It’s an ideal place for people to overnight as they are coming or going. Each of 18 or so people we’ve talked to have been coming to Haiti for a number of years. In fact, a woman named Betty has been coming here for mission work for 41 years (confession: as I watched her this morning at breakfast I wondered if that would be me 35 years from now, sitting at the table with a bunch of people visiting Moldova. The thought made me really tired!).

We’ve had fascinating conversations with them on the topic of safety in Haiti. There were 3 unrelated people/organizations who have worked in Haiti for at least 20 years. All said they remember when Haiti was considered to be one of the safest countries in the world. I thought that was interesting. Even more interesting to me was when they came to the conclusion that they felt part of the reason for the violence Haiti has experienced has happened as a result of Haitian people living in and traveling to the United States, learning the violence in America, and bringing it back home with them. Understand, we weren’t sitting around the table with a group of anti-American rebels, but with 2 missionaries and a director of a faith-based relief organization who, collectively, shared over 90 years of ministry to the people of Haiti. It made me stop and think. I’d not thought of this before, but I suppose it is true; if western styles and fashions can spread around the world, if our American pop culture becomes Europe or Asia’s pop culture, our violence can also serve as a model to other countries. We don’t just share the good things….we also can share the bad. Interesting to chew on.

Later on in our breakfast conversation I asked the director of the relief org if he would mind sharing the page from their team manual which talked about safety. He happily agreed and asked if I wanted to know what the first rule was: “If you’re concerned for your safety while on this trip, then we do not recommend you leave the Miami airport during your layover.” Amusing. And, true. At the end of our conversation, all of them, with all their decades of ministry experience in Haiti, agreed that the country is much safer now than it has been in a long time.

Those who know me know I’m THE biggest scaredy cat ever—I mean, I’m so scared to fly I don’t even unbuckle on the airplane. But, before bringing groups here I really wanted to and needed to experience Haiti myself to properly gauge the issue. Stuart and I were just talking about this and both agreed that neither of us have felt uneasy or that we were in danger at any time we’ve been here.

While talking about this, it’s worth noting that our teams don’t ever mill about on the city streets anyway. We work our teams hard: they wake early, have breakfast and team devotions, pack the vans and head out to the orphanage where they spend the day with the children. Sometimes the team will bring the goods for sandwiches and eat somewhere on site at the orphanage, and sometimes we’ll load up with our translators and partnering local church members and take over the local pizza place or small restaurant. At the end of the day we load back up, fall asleep in the vans on the way home and then unload, eat dinner, talk about the day, have prayer time, shower and pass out. The only trouble makers we generally ever see are about 8 or 12 years old and can be easily deterred with a soccer ball and some attention.

So, all that to say….teams….bring it on. These kids need you here. Jesus needs you here. Bad.